Yesterday was Khloee’s first time ever at the beach.  I figured she’d either be terrified of the ocean (since she jumped into the pool and almost drowned the day I rescued her) OR she’d love it because she’s so crazy.  Well, she surprised us all! 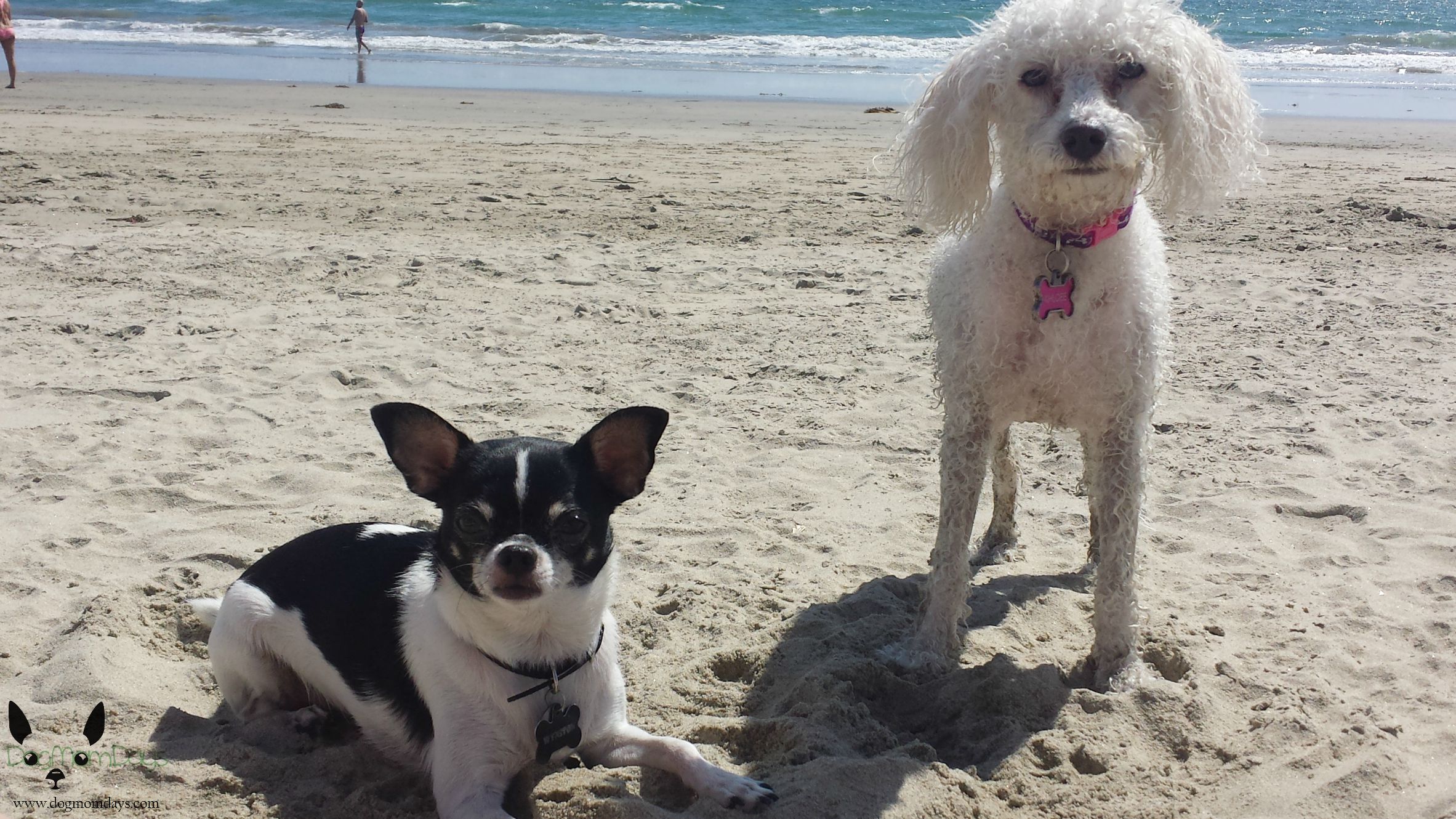 We arrived at Huntington Dog Beach an hour after we left the house.  Unfortunately it took longer than expected due to accidents and insane Saturday traffic.  It also ended up taking us about 30 minutes to park because everyone and their mom decided to show up to Huntington when we did.  But once we unpacked the cooler, chairs and dogs, we settled into a nice spot on the beach and it was time to play!

Matt took Khloee out to the shore immediately.  Much to our surprise, she hopped right into the ocean like it was no big deal!  It was a very windy day, causing the waves to crash loudly upon the sand, but Khloee didn’t mind a bit.  All she wanted to do was run with the wet sand beneath her paws, the water sometimes chest high.  We kept a very close eye on her and she was never in the water without one of us right next to her.

There were more people and dogs at the beach than we had ever seen before.  It still wasn’t super crowded where we were though.  Some areas of the beach were wall to wall people, but we chose to go a bit further down so we’d have a lot more space to ourselves.  Every now and then another dog would come over to our little camp site, but it was wonderful and Wynston very much enjoyed being able to sunbathe without disruption.

One of the best parts of our beach day was seeing all of the families who brought their dogs out to have fun in the sun.  There were lots of people running with their dogs, swimming and playing fetch.  I didn’t see any dogs being mistreated (thank God), nor did I see any prong, choke or shock collars.  The people who sat closest to us had beautiful friendly dogs, which included a Whippet (who I wanted to steal for my own), a Pug and super cute Chihuahua mixed breed.  Khloee ran around with the Whippet like they were BFFs, and the family joked that we could take her home with us.  I would have totally taken them up on that offer…

Even Wynston got a lot of exercise yesterday.  He’s definitely a “beach bum” and prefers to just lounge around and dig in the sand, but since his sister was being so active, Wyn definitely needed to join in on the fun.  He still didn’t want anything to do with the water, but he enjoyed running full speed back and forth, while he and Khloee raced for the tennis ball.

Every dog we encountered during our time at the beach was extremely friendly.  I chatted with a few different dog moms and dad, and enjoyed seeing all of the different breeds that crossed our path.  Doberman Pinscher, Pug, mixed breeds, Bull Terrier, Old English Sheepdog, Great Dane, West Highland Terrier and German Shepherd were just a few of the fun dog breeds we ran into.  Luckily all of the dogs were really well behaved, which made the experience for everyone that much more fun. 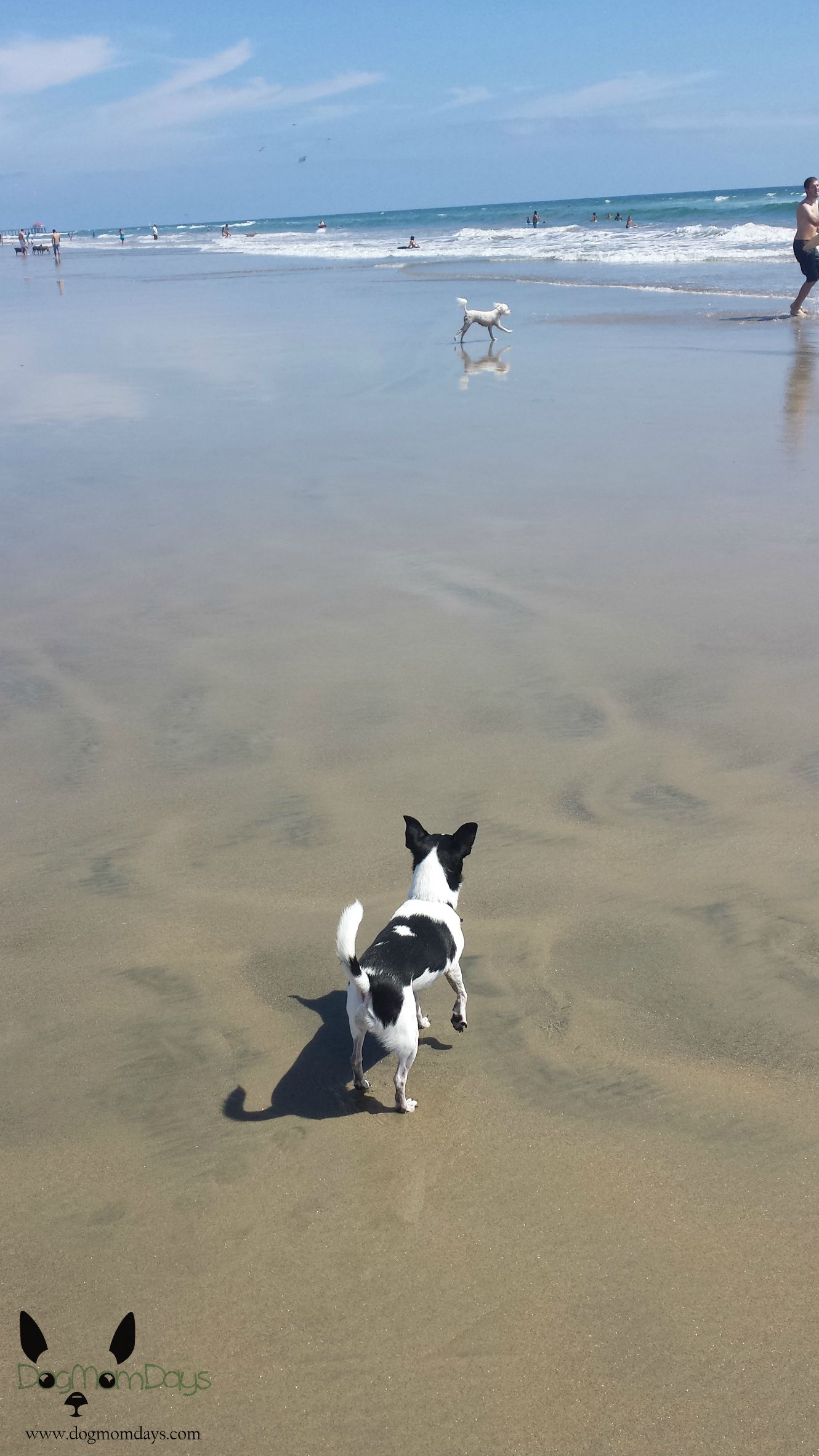 Khloee was a sandy mess.  #poodlelife.  By the time we left and walked to the car, she had dried quite a bit and a lot of the sand had fallen off of her.  We were fully prepared with towels for the car and doggy shampoo for a bath afterward.  I have to admit that it was really cute to see her dark, muddy paws and sandy nose though.  Khloee was carefree and enjoying life, and that’s what really matters!

After several hours of fun in the sun, all four of us were exhausted.  Khloee and Wynston slept the entire car ride home and after baths and dinner, they both passed out for the night. Even I was in bed and asleep by 8:30pm!!!  Today we’re just going to rest before hitting the road and heading back home tomorrow.  It’s been a wonderful, relaxing getaway!