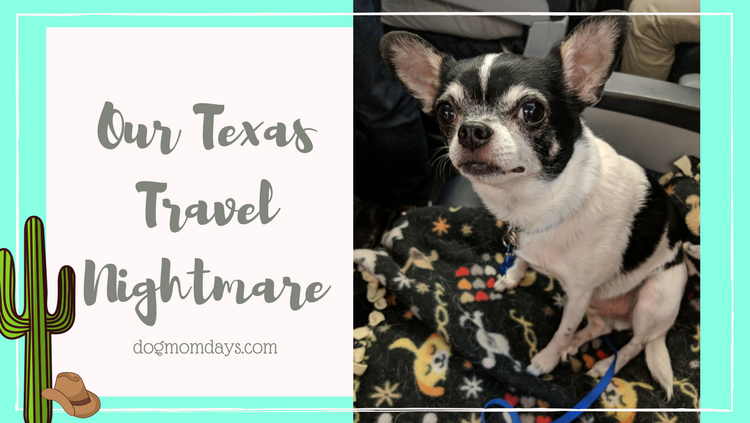 Our travel day started so smoothly. Little did I know that eight hours later I’d be in the middle of an abandoned rental car building with Wynston, bawling my eyes out…

I left my house at 2pm on Wednesday for a 4:15pm flight out to Texas. I had been awake since 5:30am so I could start work early, and I’m glad I did because I literally worked hard until 2pm. Despite that, I was ready to travel with my boy. This would be the first flight Wynston and I took with his ESA (emotional support animal) status!

Traveling with Wynston is one of my favorite things to do. He makes every experience so much more fun and enjoyable. This trip would be no different. I was prepared with our favorite Gen7Pets roller carrier, my carry-on laptop bag, and a large piece of luggage for our 10 day trip. 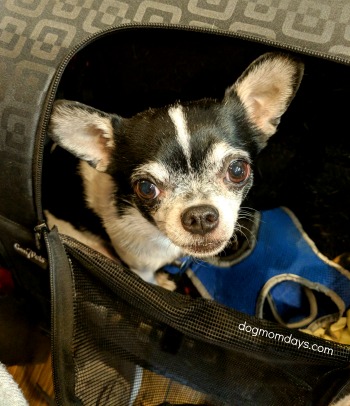 The initial travel process at the airport was easy. I checked my bag, we made it flawlessly through security, then we grabbed a snack before waiting at our gate. I remember being mindful of the fact that our gate was unusually crowded with business men. The endless amount of men in suits overwhelmed me because they all seemed to have zero regard for others around them. As they all forced themselves toward the front of the gate to nab a place in line, I made the executive decision to do the same. I needed some extra time being that I had Wynston in tow. It takes a little longer than a normal person to get settled into an airplane seat.

Soon enough, it was my turn to scan my boarding pass. The friendly American Airlines employee said, “Oh how sweet! You have a little baby! Give me one second while I check everything.” I’m assuming she was seeing if I had paid for Wynston’s admittance, although instead he was in the system as an ESA, with proper legal documentation. “Okay sweetheart you’re all set! Enjoy your flight!” I scooted along, my boy in tow, to another line of business men. All I heard was cell phone jabber. I felt like I was truly representing my “Dog Mom AF” shirt in a sea of arrogance.

So I get to my seat. 18B. I choose the middle seat on American Airlines flights because they have the most space underneath the seat in front of me for Wynston’s carrier. But who’s sitting in the aisle when I arrive at my row? An extremely rude old man on a cell phone whose business call was clearly more important than a young lady with a dog would may have appreciated some help. No matter – I handled it. I got Wynston situated on my lap and he fell asleep immediately. 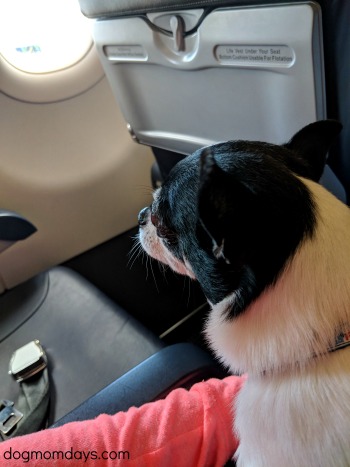 We sat down and got comfortable again, when the window seat guy exclaimed, “OMG you have a dog! I miss my dogs! This is the best seat ever,” as he pet Wynston’s head. Phew. At least this guy was cool…

The rest of the flight we enjoyed some random chatter and photo sharing of our dogs. He asked me questions about Wynston and insistently remarked how well behaved Wyn was being. (Obviously, am I right?!). Wynston slept the entire flight. At one point he moved his head onto the nice man’s arm rest. “Whoops, I’m sorry!” I said, as I went to move Wynston back into our space. “Oh no, no. I’d feel honored if he’d use my arm rest,” he replied back. My heart was warm and I was so relaxed. There are good people among us. (Traveling on an airplane with your dog? Check out these tips for doing so!) 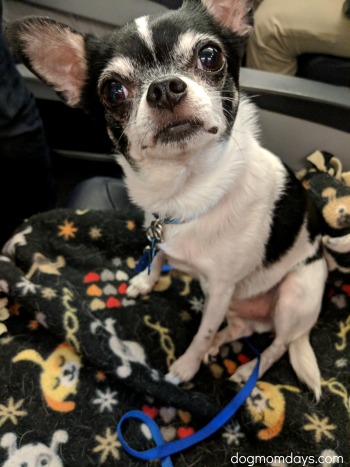 There was quite a bit of turbulance during that flight but not once did I get nervous. Typically when we encounter bad weather on a flight, I absolutely panic, and I need to take some sort of calming supplement. This time I didn’t. Having Wynston on my lap made a world of difference.

At the end of the flight, the lovely passenger next to me helped me collect my items and get Wynston in his carrier. I thanked him for making things easier for me and for being so kind. I think the man was surprised by my undying gratitude, but I was truly that grateful.

Our next flight was scheduled to depart just an hour after we arrived to Texas. I was excited about the short layover so I could get on with my travels. The terminal we were in was small and quiet since it was late at night. Those of us headed to our final destination gathered around the gate to prepare for the flight. Then we got the announcement that the flight was delayed an hour. No big deal – we could grab a bite to eat and take our time, then be ready to go.

Wynston and I got a few more snacks, took a potty break, then I checked my phone. I got the worst text message ever, stating that the flight had been cancelled. It was 9pm and the next flight wasn’t going to go out until the next day around 4pm.

You’ve got to be kidding me.

My luggage is on the plane (of course they won’t get it for me unless I put in a request for it, which was an EIGHT hour wait at that time), Wynston hadn’t eaten dinner, as it was in our luggage, and all I had on me was my laptop, ID, debit card and keys.

I hung out (in a panic) for about 10 minutes trying to decide what to do. What I did know was that there was no way in heck I was going to hang around the airport for the night. So I headed to the rental car area. I decided I’d just drive.

It was about 10pm and it was pouring outside. I was confident in my ability to drive in the rain. At least Wynston and I would be warm and on our way. We could stop and grab food somewhere, take potty breaks, and move on.

At that airport I had to take a shuttle to the rental car building. We waited about 10 minutes for the bus to show up, and Wynston had to go potty in the pouring rain. He didn’t seem to mind, as we mostly stayed dry. At that point he just had to relieve himself.

After a stressful bus ride we arrived at a large building full of about eight rental car options. I felt closer to being able to get out of there and on my way. Would you believe that not ONE company would rent a car to me? Either they didn’t have cars left or they wouldn’t rent to me driving one way. By the time I walked up to the last counter, I was crying…again. The worst part was that I was clearly distraught at every single rental car counter I went to and not one person offered to help me. No one took time to ask me what happened or how they could potentially help otherwise.

There I was, standing in the middle of the building bawling my eyes out. I was wet, tired and more stressed out than ever. A really nice woman finally came up to me (she was a traveler herself) to see if I was okay. She offered to drive me somewhere but I literally had no idea what I was going to do. She suggested calling a nearby hotel and calling a Lyft to get there. And I did.

I called the Staybridge Suites and nabbed one of the last rooms they had available. After that, I ordered a Lyft. My ride arrived about 5 minutes later but of course we had to walk in the pouring rain to get the vehicle. Nothing was easy. Nothing.

By the time I showed up the hotel, I was soaked and beside myself with emotion. The Staybridge Suites employees were the first ones to show empathy for me. They offered me some free food items and ibuprofen for my headache. They wanted to help in any way they could.

I started to feel better almost immediately because I knew Wynston and I were warm and safe. Then what happened when we stepped foot into the hotel room? Wynston got the zoomies. He started running all over, happy as can be. His tail was wagging, he was smiling and he was super excited. At that moment I had a small epiphany. Although our flight was cancelled, I was soaked from the rain, I didn’t have my luggage and I still didn’t have a solid plan, I was overcome by gratitude. Wynston didn’t care about what was going on. He just knew that we were together and everything was okay. I realized that dogs can teach us so many life lessons. 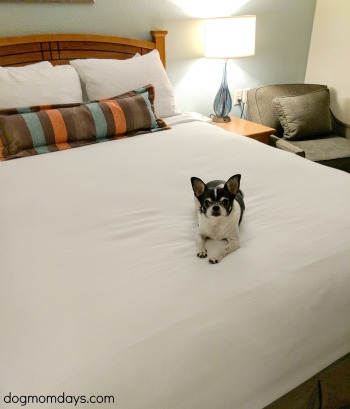 Despite all of the external anguish I was experiencing, I had my boy. My world. My everything. And he was happy, safe and healthy. His zoomies were priceless. We enjoyed a frozen pizza together for dinner, and took advantage of the warm bed. In the end, it didn’t matter that we were without our belongings and a plan. What we did have was each other. Everything would work out. And it did.

Fast forward through a late night drive, a day without electronics and another luggage fiasco, we finally got settled in to Texas. We received our luggage around midnight on Thursday and I was back to work Friday. It took me a full day to get rid of my feelings of anxiety and stress. I got amazing sleep this weekend so now I’m feeling well rested and ready to conquer the week! 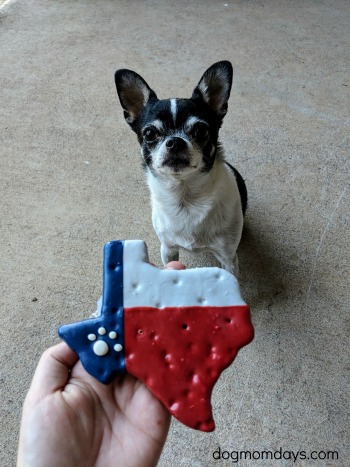 Through the experience I learned so many valuable lessons. One being that I need to always have chargers on me. And another being that as long as Wynston and I are healthy and safe, that’s really what matters the most.

The positives of our trip are the fact that Wynston was an absolute angel as his first flight as an ESA, none of our items were stolen or damaged, we are safe, and now I have lessons learned moving forward.

This was the first time I’ve had such a disastrous travel experience. It was bound to happen at some point, but it was just terrible timing because I ended up missing a day of work. I can’t control the weather, and Dallas had record rainfall that day (go figure), but it still put a damper (pun intended) on all of my plans. However, we’re settled in now, everything’s good, and I have those valuable lessons under my belt.

Have you ever had a horrific travel experience? Tell me about it, and how you overcame it, in the comments.