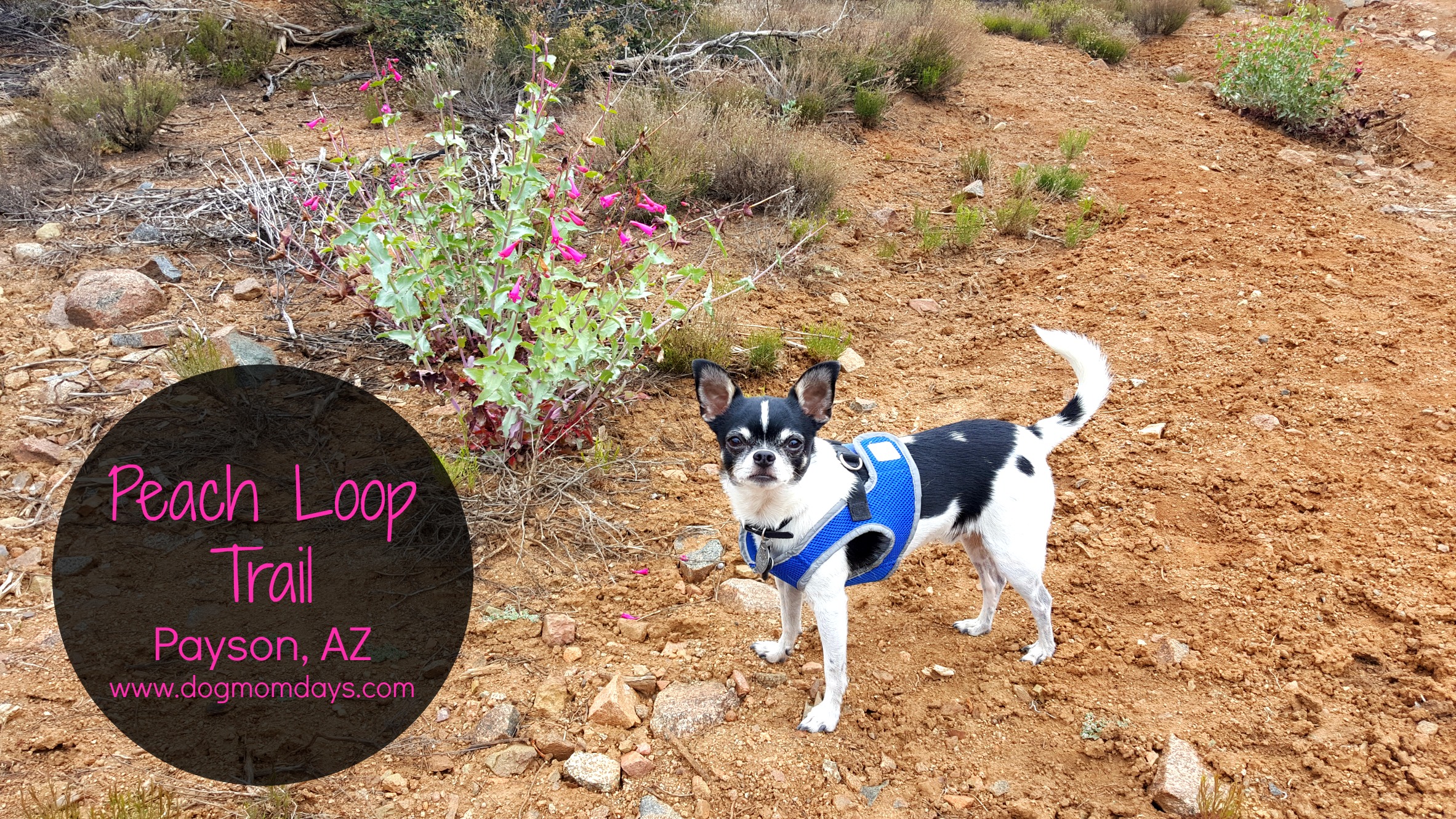 When I say a hike is difficult, that could mean something different to a really experienced hiker. I have a bad hip and small dogs, but I try to be reasonable when ranking the ease of hikes. I figure that most people have two good hips LOL. Either way, the Peach Loop Trail in Payson, AZ was moderately easy for a majority of the hike. Toward the end when we literally had to fall down the side of a mountain, it became super adventurous…and dangerous. 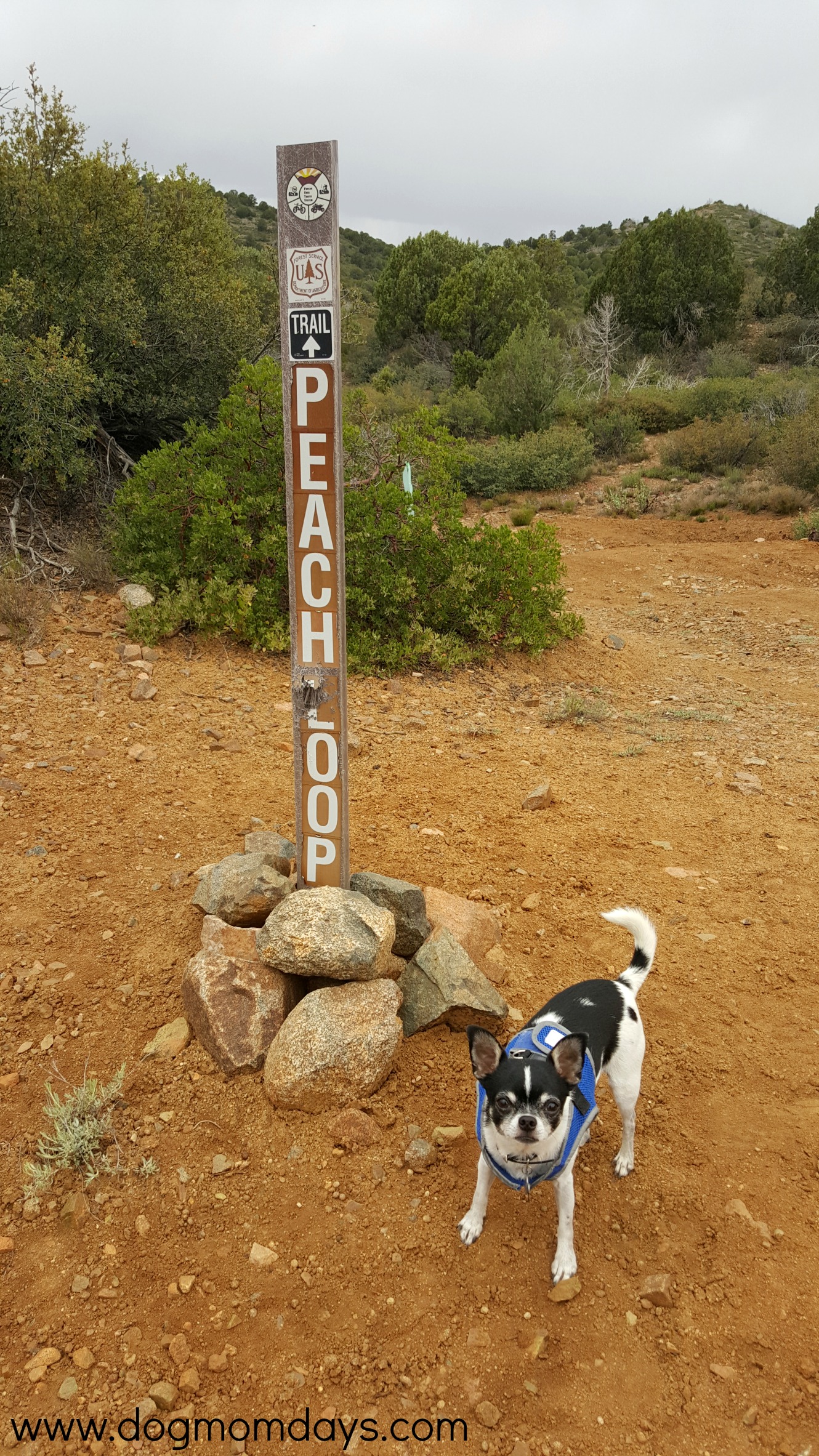 While this trail should have taken us two minutes to drive to from my mom’s house, it took us about 30 because we couldn’t find the trail head. The map looks like it should be really easy to find. Well, the signage is poor and the trail head is between two houses. When you turn in it looks like you’re driving into someone’s driveway. 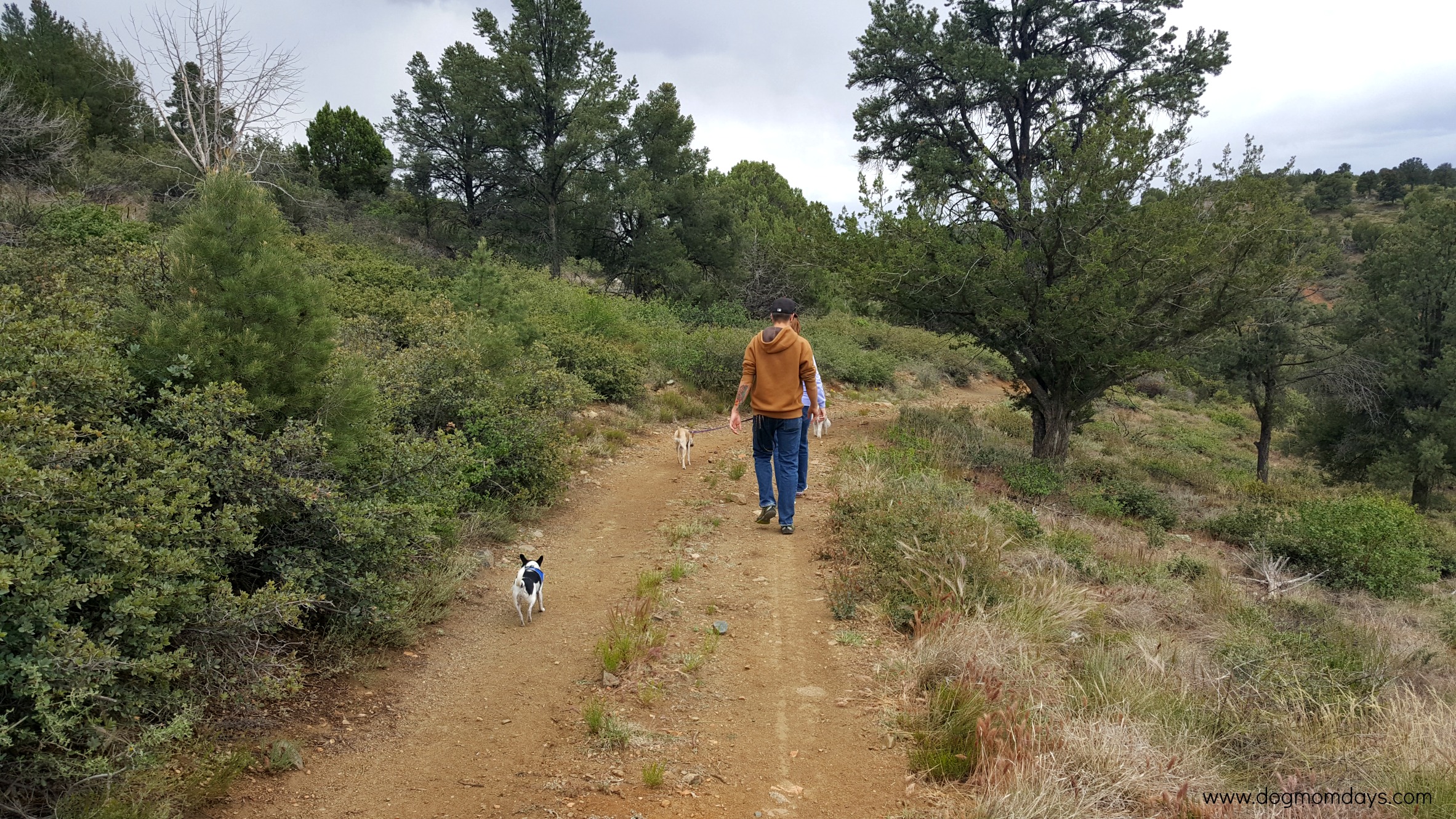 Once you get inside, you can park immediately to your right in the rocks. You can also choose to drive further up on the path and park along the side. There was no one else on the trail when we were there. That’s right – zero people. It was cloudy with a chance of rain. It was a Saturday but the weather was enough to keep people away apparently. 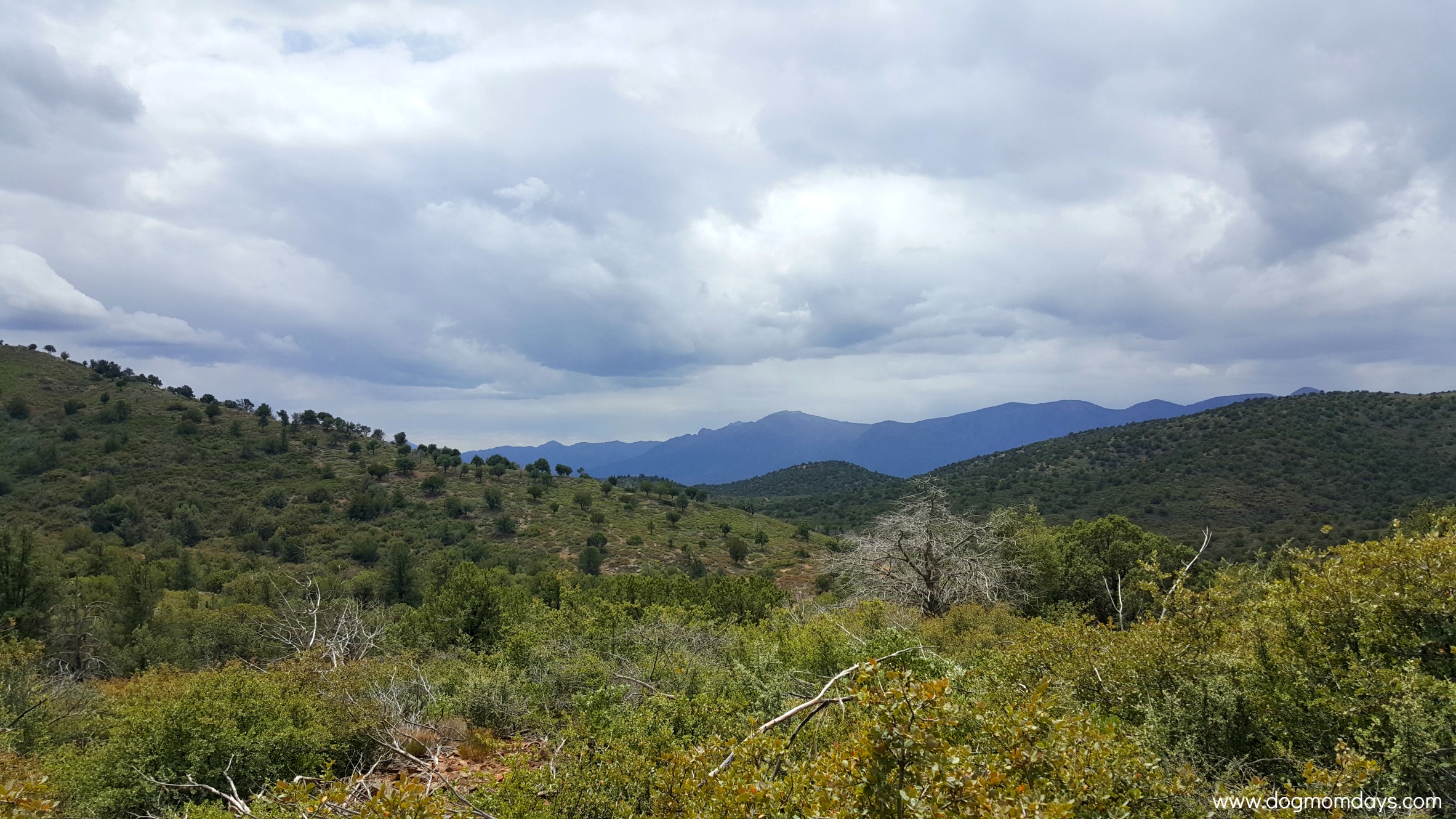 I have blunting and fraying of the right acetabulum in my hip. David was recently diagnosed with cancer and he had surgery. We can’t handle a difficult hike and we weren’t prepared for one. The Peach Loop Trail starts out easy. It’s a pretty smooth trail at the beginning – no boulders to climb over. It’s a slow, peaceful ascent up a mountain. The views are stunning and the cloud cover actually made it extra beautiful. It was sprinkling intermittently, which really brought out the desert smells. 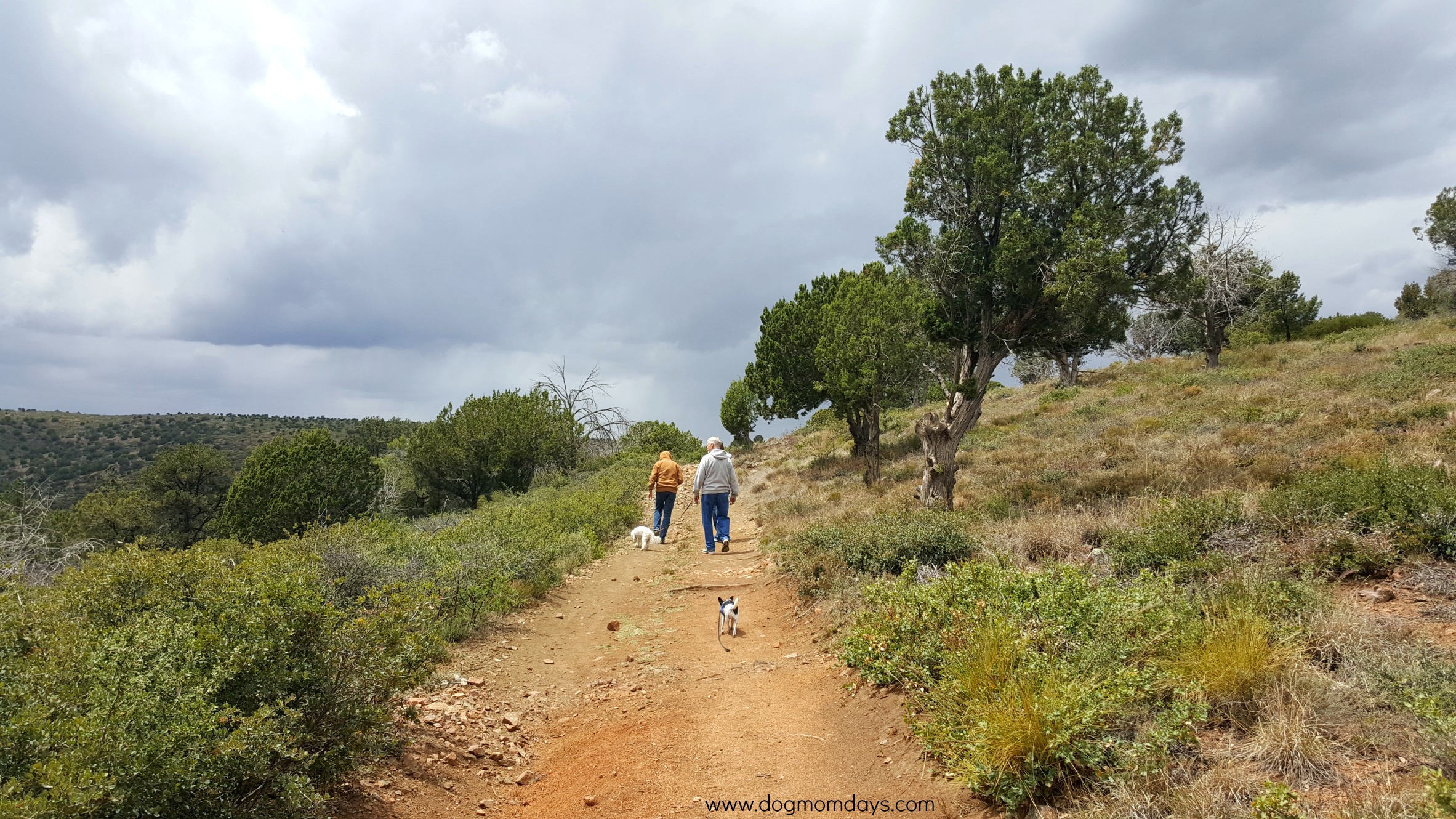 Every now and then we’d stop and take in the sights. We kept seeing a really steep trail ahead of us and we thought that it was “the more difficult trail.” Turns out, we were already on the difficult trail…

As we walked further and higher up into the mountains, it started to rain. We all had jackets with hoods and I brought an umbrella. Luckily it didn’t rain hard enough to warrant the umbrella.

About halfway through the hike, the trail starts to become loaded with big rocks. A walking stick would have been beneficial for me. It didn’t slow the dogs down at all but I was pretty slow. Matt kept the girls ahead and the rest of us lagged behind. But hey, we enjoyed it!

There were lots of gorgeous wild flowers along the trail. They were so colorful and added a pop of beauty among the cloudy atmosphere. 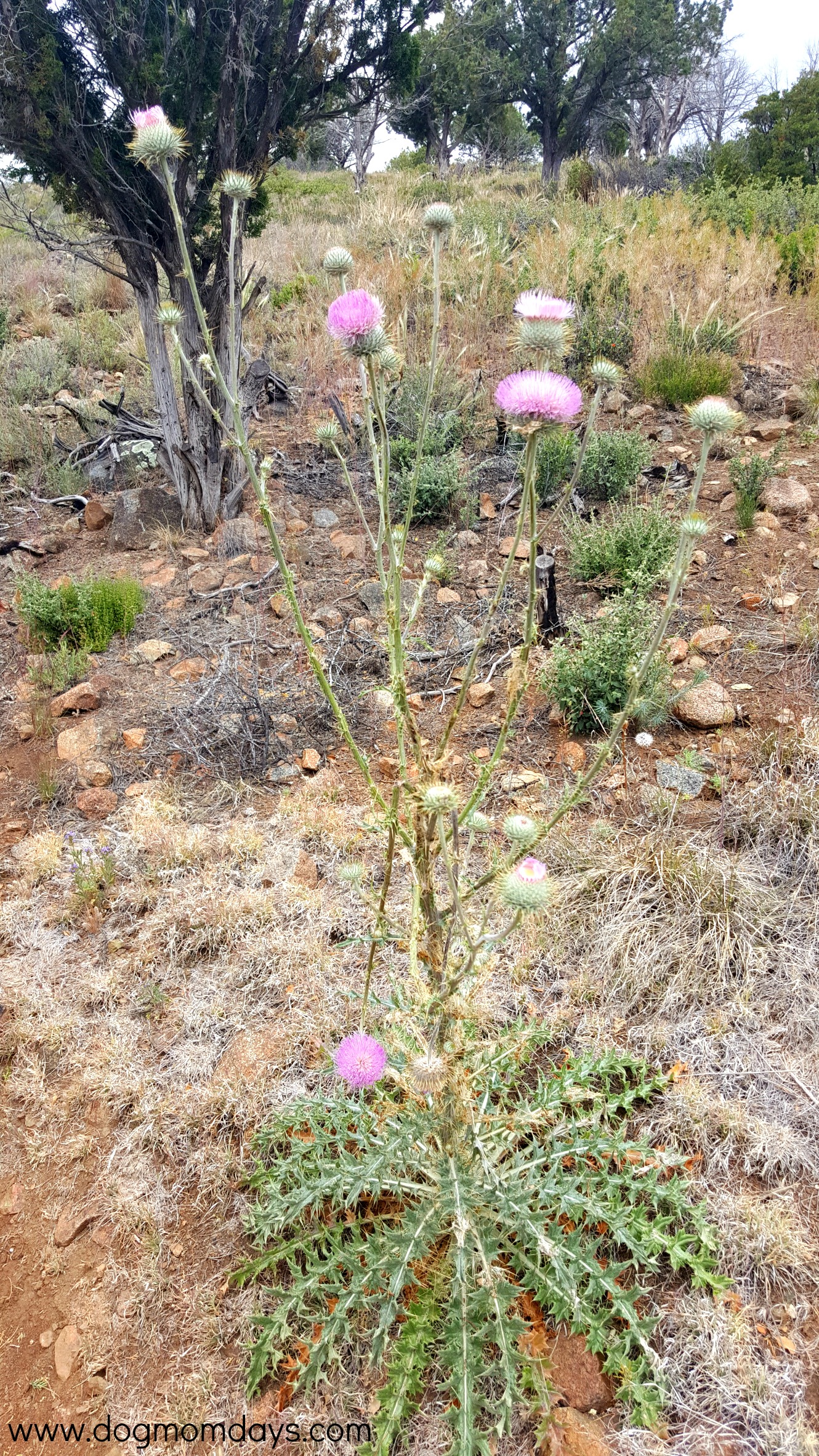 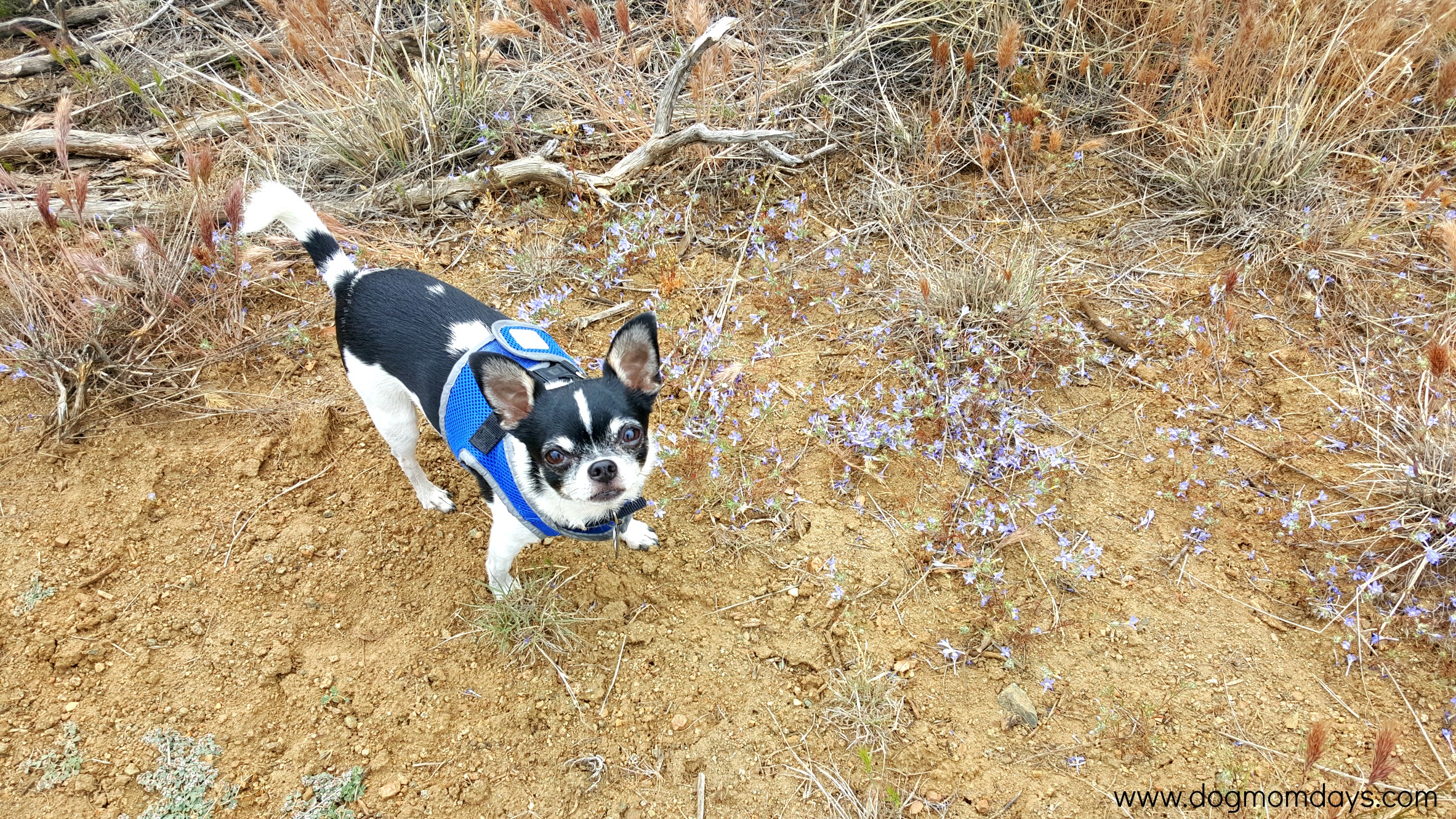 We had only walked about a mile when it started to rain a little harder. A mile on this trail felt like five miles but we kept joking about it, as it was quite an adventure. At one point we were pretty far up on a mountain and could see for miles around us. But then we came to a stop – the only trail in front of us was an extremely steep one going down the side of the mountain. We saw no other way down. Well, okay then! None of us were prepared with proper hiking shoes so it got a little bit scary! My mom and I both fell at one point but laughed it off and continued down the mountain. Let’s just say it made for a great story. 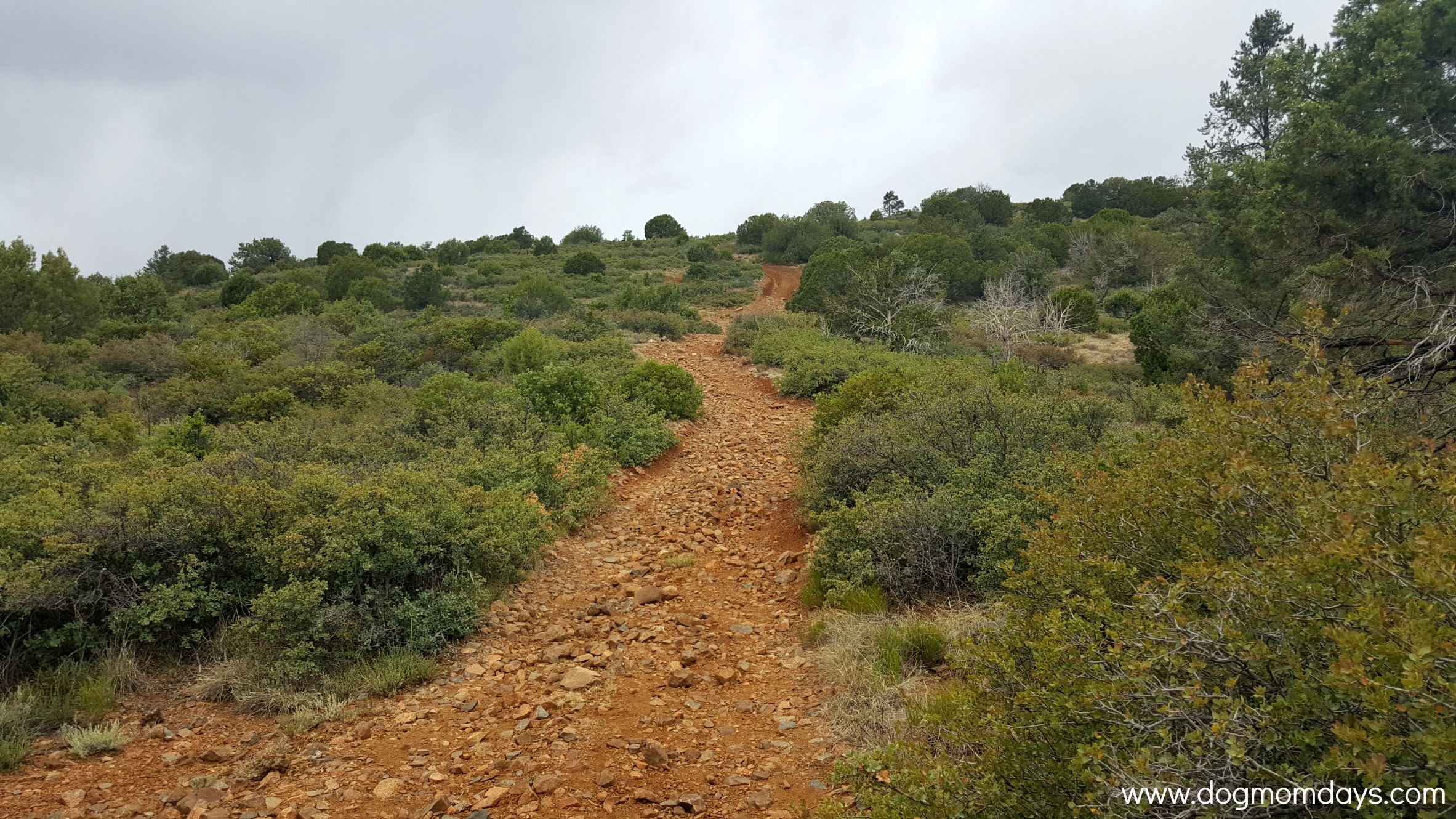 The Peach Loop Trail was about two miles long. Two miles of a crazy, uphill, windy trail is different than two miles of flat ground. I would rate this hike as “moderate” for someone who’s in good health condition 😉 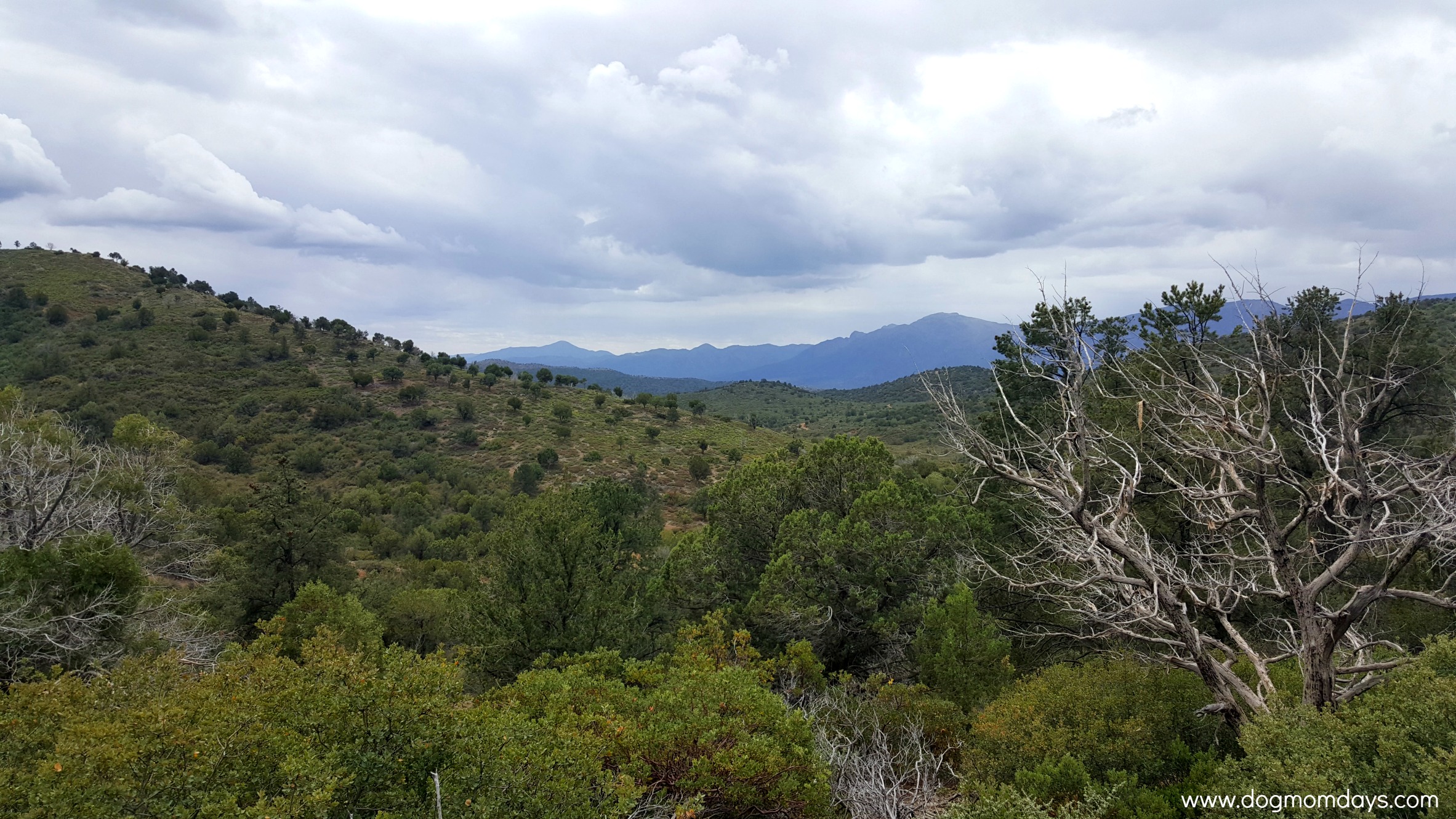 Overview of The Peach Loop Trail

Pets: leashed pet welcome – please clean up after them!

Directions: West on Country Club Drive. The entrance is between two houses directly in front of the Payson Golf Course clubhouse and parking lot. 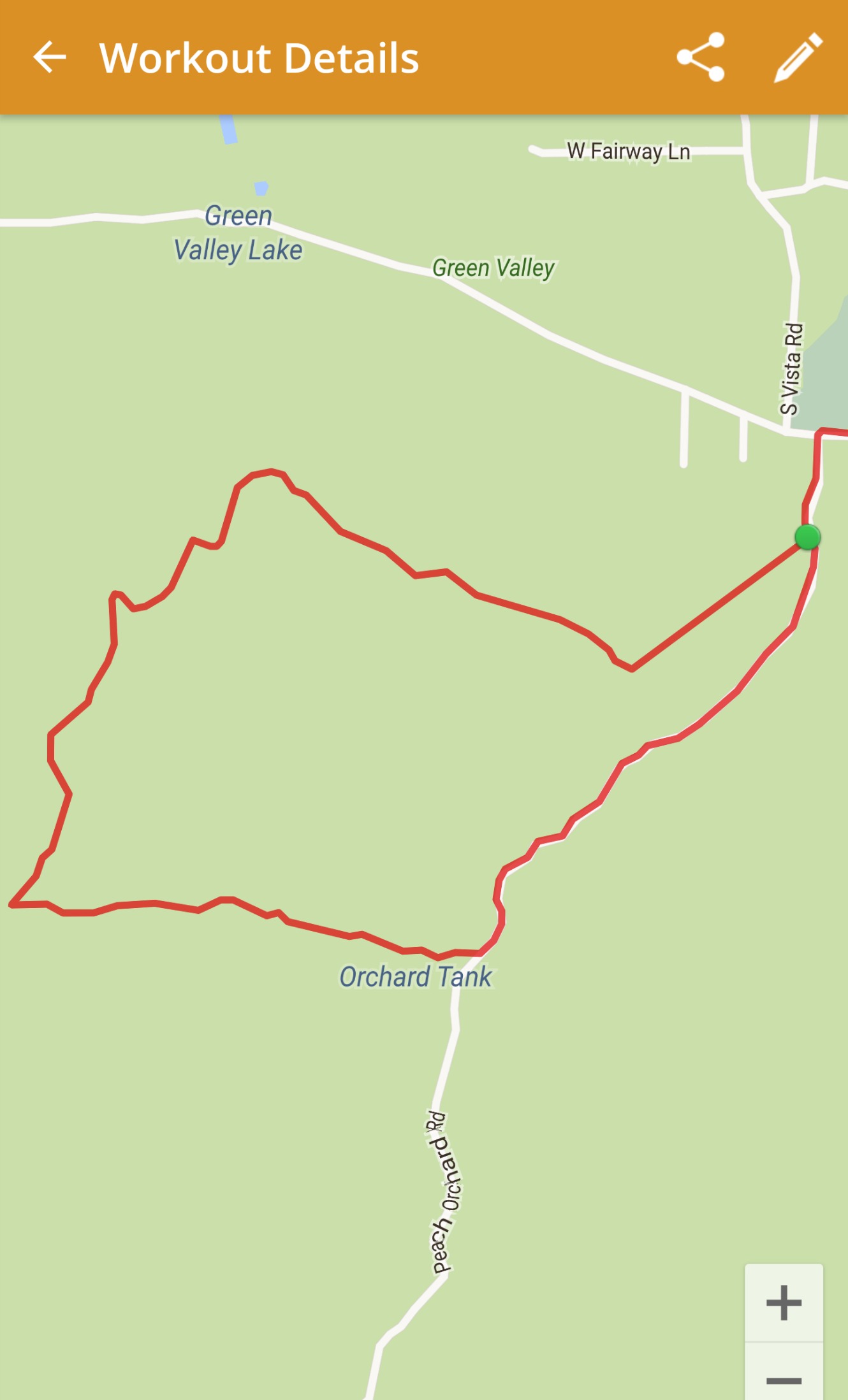 This trail is worth checking out simply for the views. It’s so incredibly serene and you can see for miles. 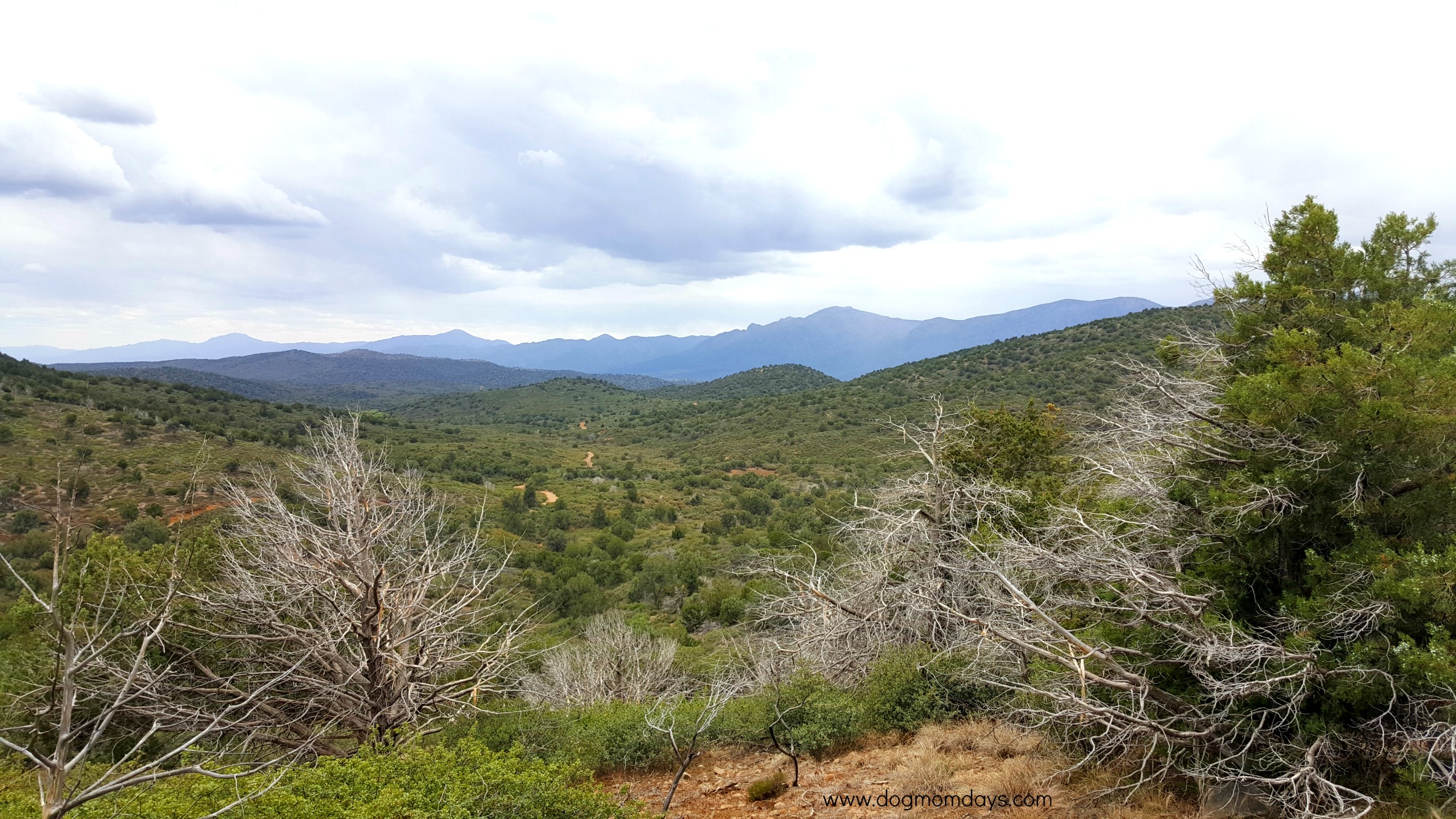 Have you ever been to Peach Loop Trail or Peach Orchard Trail?