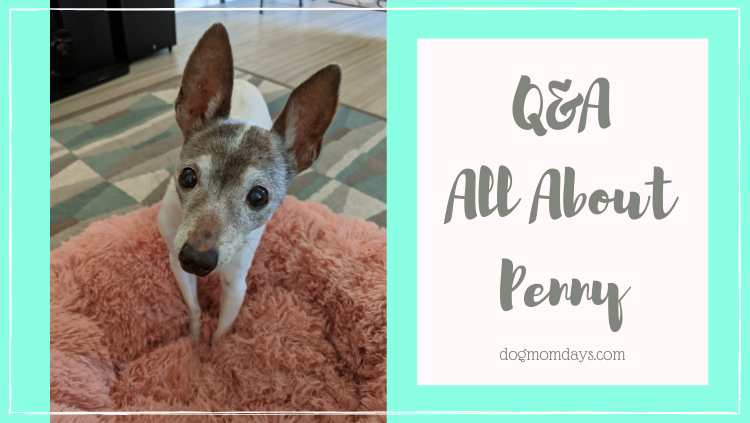 On February 23, 2020, we adopted a senior dog from the Chihuahua Rescue of San Diego County. Her name is Penny, and she’s PERFECT. Since bringing home a new pup, and a senior at that, we’ve had lots of questions about Pen and how she’s doing. So let’s jump right in for a Q&A session!

All of the questions below were asked via our Facebook page.

What breed is Penny?

Pen was originally said to be a Rat Terrier/Chihuahua mix but I believe she is a purebred Rat Terrier. She has the looks and personality to go along with it. I’m thinking about doing a cheek swab Embark DNA test on her to find out for sure! Dog DNA tests are so much fun!

How old is Penny?

I just found out through previous documentation that Penny is actually 12. She turns 13 years old on October 12, 2020. Rat Terriers live 12-18 years, so I pray for another good 5 years with her!

Is Penny deaf and can she be taught sign language?

Penny is not fully deaf, but she’s definitely hard of hearing. Deaf dogs can be taught sign language, and we will go that route when necessary. However, I add hand motions to training commands anyways, so it’ll be fairly easy using positive reinforcement. She seems to know “sit” and “stay” with hand motions already.

Where did Penny spend the first several years of her life?

Penny lived with the same owner until she was about 7-8 years old. Sadly, her owned passed away. That’s when she went into Chihuahua Rescue of San Diego County for the first time. It was through the rescue that I fell in love with her those many years ago on Facebook. Before ending up at the rescue for a second time, Penny spent about 5 years with another lovely retired lady. But that owner developed dementia and could no longer care for Pen. Now she’s with us for good!

How is Penny getting along with our other kids?

Penny could literally care less about the cats. The cats don’t care about her either. It’s completely peaceful. Everyone does their own thing, which I’m super grateful for. Of course Wynston and Penny got along right away, and Pen seems to follow Wyn for direction sometimes.

Does her tongue always hang out of her mouth, and why?

Pen had a majority of her teeth removed by the time she was 8. It’s sad that she lost teeth so young, and it’s a warning that you should be diligent about your dog’s dental health! With that being said, Penny’s tongue hangs out of her mouth about 90% of the time, and it does that because she’s missing most of her teeth.

What is her favorite activity? Favorite snack?

Penny’s favorite activity is definitely sun bathing. I’d say her favorite human snack is steak and her favorite doggy treat is Nudges chicken grillers. (Shameless affiliate link). They are soft and easy to for Pen to eat.

How is she adjusting to her new home overall?

Overall, Penny is adjusting like an absolute champion. She’s only been home with us for a week and she seems super comfortable and happy. Each day we’ve seen improvement with her energy, which makes me extremely happy. We have been allowing Pen to show us what her routine was previously like and doing our best to conform to that. For example, Penny seems to want to eat around 6:30pm then be in bed by 9. She likes to wake up around 8am, but she doesn’t prefer to eat in the morning. As we’ve made these realizations, we have worked to create the rest of her routine around what she’s comfortable with. I’d say that the transition really couldn’t be going any better!!

What does Wynston think of Penny?

The very first time Wynston saw Penny, he began crying. This means that he’s SUPER happy and wants to say hi really, really badly. Wyn absolutely adores his new sister. I think he even understands that she’s older and slow. In fact, it seems like he knows what’s going on. I can’t explain it, but he just…knows.

Has Penny brought out any new traits in Wynston?

I’m not sure if Penny has brought out any new traits in Wynston, but she’s brought out some existing ones. For example, Wynston is incredibly patient, and he’s really been demonstrating extreme patience with her over the last week. He doesn’t growl at her if she gets too close to his food or sleeping spot. He doesn’t get upset or angry if she accidentally pushes him while begging for food in the kitchen. Wynston is showing me just how wise, smart and in-tune he is. I am such a proud mom.

Have there been any challenges?

Yes and no. There haven’t been any challenges in our home with the other animals, etc. So that’s good! Our only challenge is and will be Penny’s health. Quite honestly, I’m concerned about her physical health. I believe she has cervical stenosis. Penny cannot really move her head to the right. She struggles to walk, as she wobbles a lot. As the day goes on, Pen becomes slower and can’t hold her head up as high. It’s brought me tears, but I’m trying SO hard to be hopeful. I’m remaining confident that the glucosamine regimen we have her on will help her back and joints tremendously. I’m also hoping that she’ll become stronger as she gains weight. We are praying that we make great progress with her health over the next month.

Is Wynston jealous or is he teaching her the ropes?

Wynston is absolutely teaching Penny the ropes. He’s so patient and kind. They eat dinner together and beg their dad for food when he’s cooking. I’m also ensuring that Wynston doesn’t become jealous or depressed by maintaining our routine and spending time together, whether it’s running errands or going to Auntie’s house. Penny can’t go on adventures like Wynston can, so that is time to spend with my son.

Where do Penny and Wynston sleep?

Wynston sleeps next to me no matter what. Our bed is fairly high and Penny isn’t yet comfortable with the large ramp we have for our animals to get up and down. Right now she seems mostly comfortable sleeping on the couch in her blankies. She ALWAYS burrows underneath her blankets. The couch isn’t very high and we have two small pet stairs at the base so Penny can get up and down without issue. The couch is also close to the patio where her grass potty pad is, so she can relieve herself however many times she needs to in the night.

Is Penny gravitating toward me or Jordan?

It’s hard to say. Penny seems like the type of pup who will love anyone who loves her. Sometimes she spends time gaming with her dad in the living room. Other times she sleeps on the couch in my office while I’m working. Other times she’s completely independent and finds a cozy spot wherever she pleases. Jordan is trying hard to make her a daddy’s girl, so we’ll see how it turns out. 😉 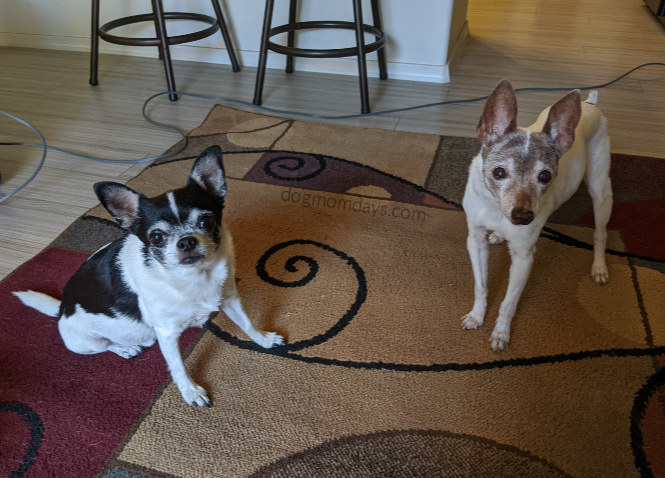 Penny has been a terrific addition to our home. She’s calm and mellow, and fits in perfectly with our other kids. I will be taking Pen to the vet in about a month, after we’ve had time to really get to know her. I also want her to remain on the supplements and see if she makes improvement before asking my veterinarian for further recommendations. I plan to have notes and plenty to report when we see the doctor, as I want her on the best care plan possible.

Thank you to everyone who submitted questions about Penny! We’re so blessed to have her with us.