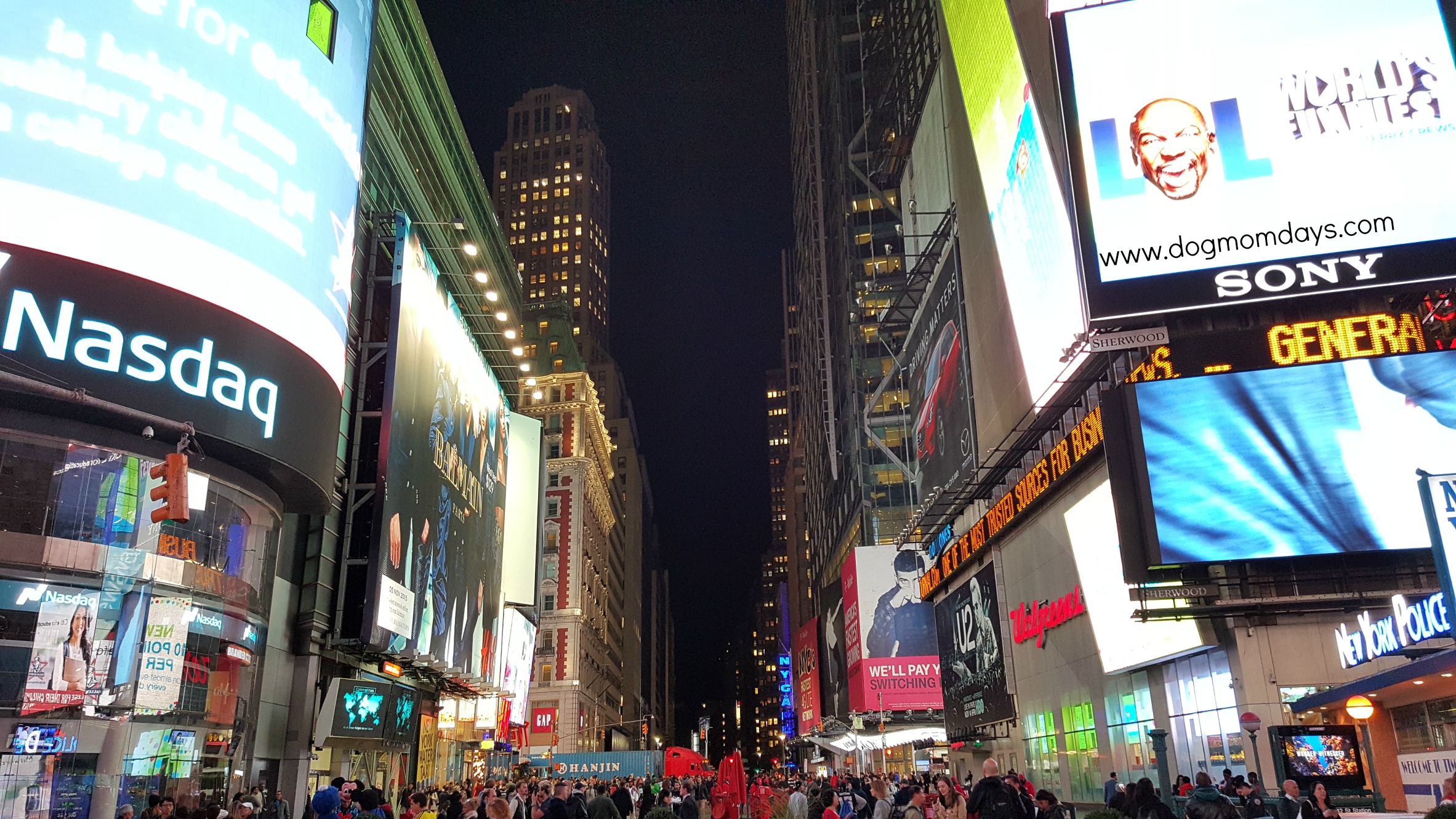 I had never been to New York.  The furthest East I had been in the United States was Pennsylvania – until Monday!   I was given the opportunity by Purina to fly to NYC for the Better With Pets Summit and I jumped on it.  I knew the summit would be amazing and my sister had just moved to Manhattan a couple weeks prior, so I figured it’d be the perfect time to connect with her.  Although it was three days of insanity, it was absolutely amazing.

I’m not much of a city girl.  I prefer the suburbs or farm country.  I enjoy having my space and being able to drive where I want without traffic.  New York reassured the fact that I don’t belong in the city, although it was really fun to visit!

I arrived at The W Hotel in Manhattan around 3pm on Monday.  It was about an hour drive from JFK airport to the hotel and it was probably the scariest drive of my life.  I’ve heard all of the horror stories about driving in New York and now I see why.  It’s truly “every man for himself” on the roads there.  Yikes.  Luckily I made it to the hotel in one piece.  When I arrived at the W, I was greeted by a few friendly doormen as I looked up in front of me, in awe over the “concrete jungle” that was standing right before my eyes.  Wow.  This will be fun. 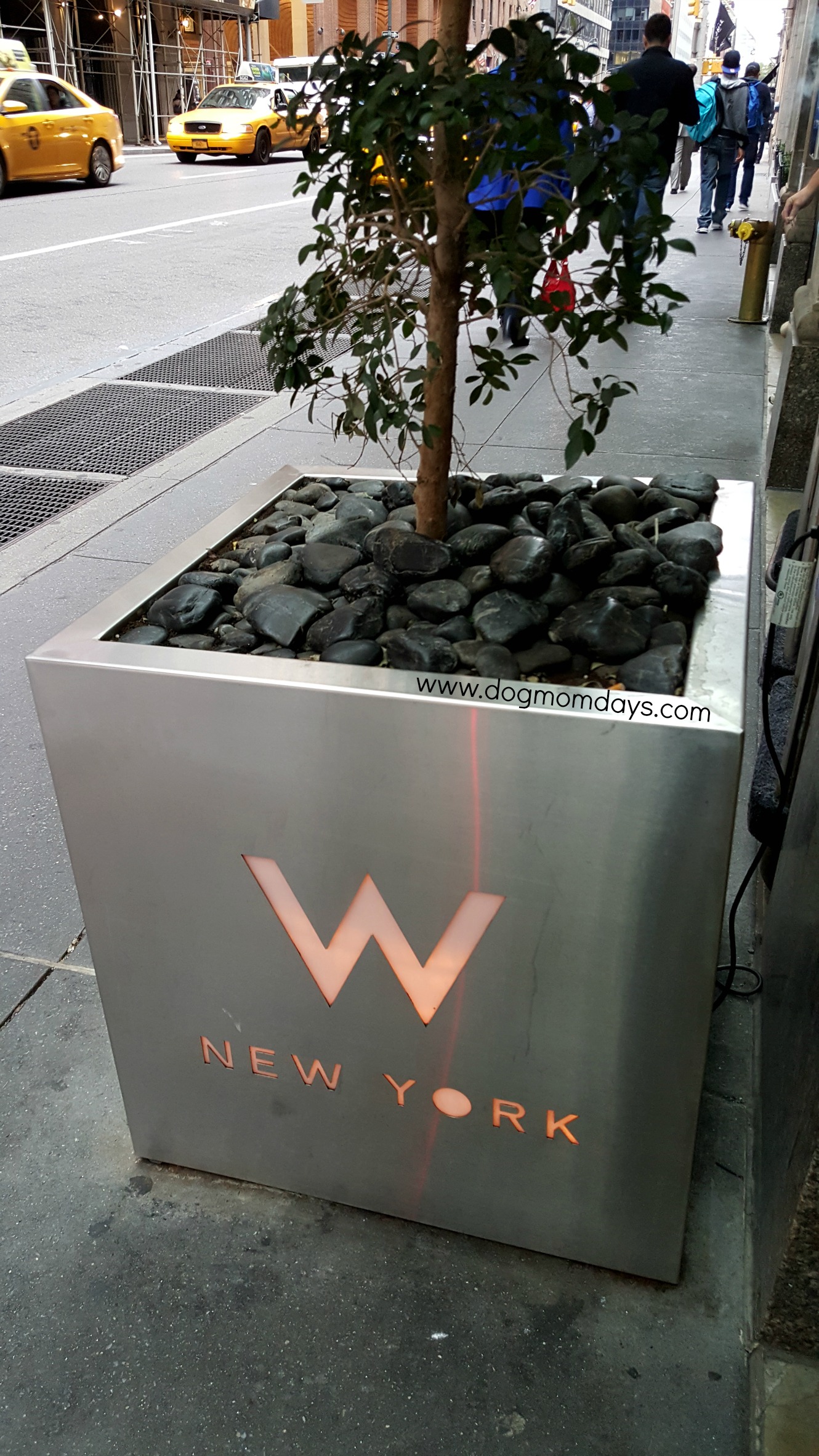 Once I got settled in to the chic, cosmopolitan hotel room, I let my sister, Kim, know that I had arrived safely (barely).  She was a mere subway ride away so within 20 minutes, Kim was there.  I admit – it was really weird meeting up with my sister on the streets of Manhattan.  It was crazy that she had just moved there and now I was there for “work!”  I was craving some chicken tenders so we started to make our way towards Times Square.

And so came my first ride on the subway.  It was just like the movies!  Business people, students and scary people trotting up and down the subway stairs, pushing and shoving each other like the end of the world was near.  Kim showed me how to purchase a Metro Card.  I felt so educated.  She also told me that I’d probably have to throw elbows at people and shove them out of the way if I wanted to get a place on the next train – something I was not good at.  I kept saying “excuse me” and “oh, so sorry” to people I was running into, all for them to glare at me or shove me back.  Apparently kindness does not matter on the subway.  How joyous!  I’m just glad my sister did the shoving and glaring for me.  I never would have gotten on one of those damn trains. 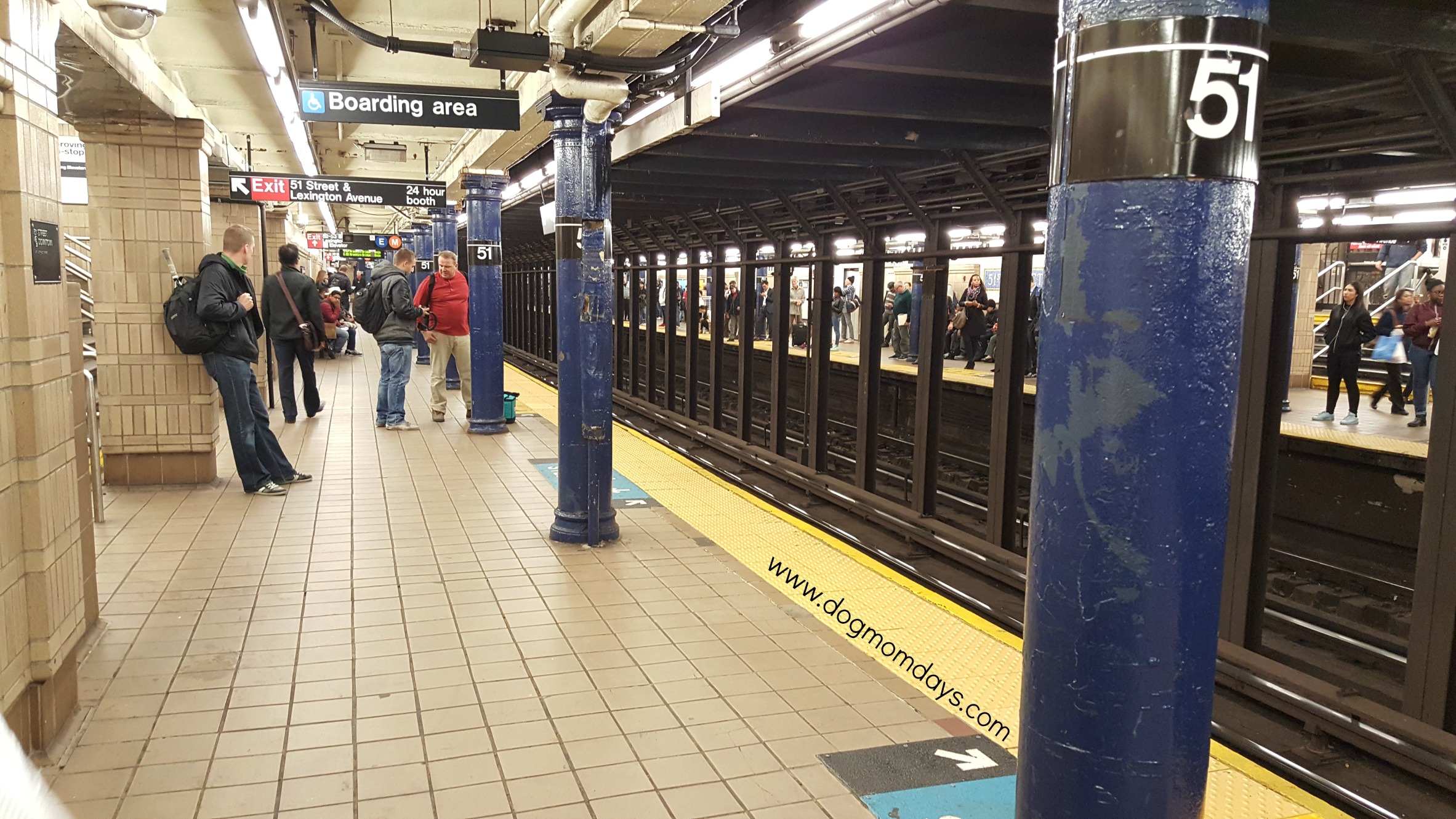 We arrived in Times Square after a short subway ride.  When we walked out of the subway tunnel, I was in awe.  It was just like Vegas.  Bright lights, people dressed up in random costumes and tourists everywhere.  I most definitely looked like a tourist.  I stood in the middle of the square taking pictures of everything I saw.  A creepy Elmo character came up to me to take a photo but I shooed him away.  Apparently people do that for a living… 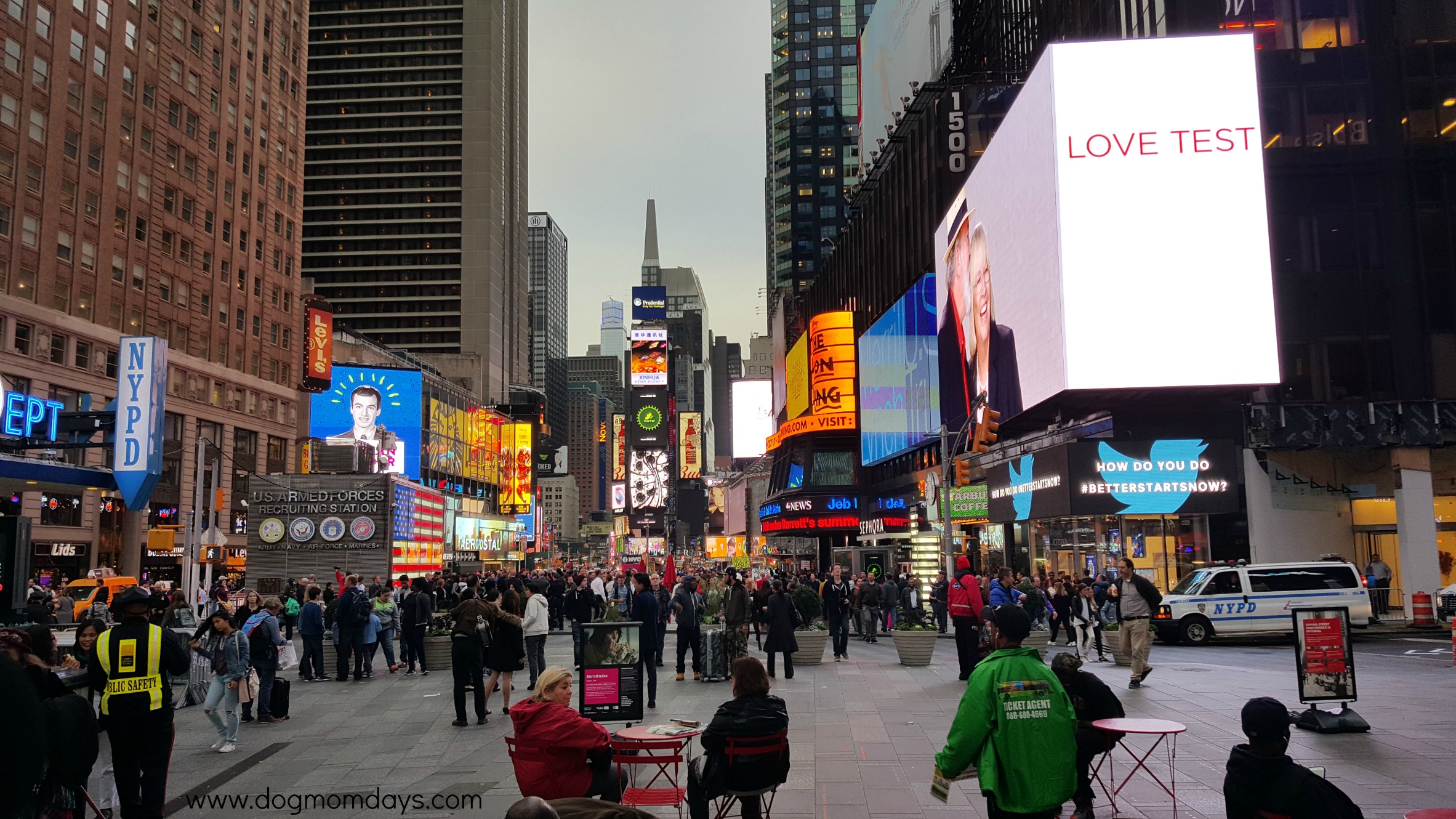 For some reason, I was craving chicken tenders so Kim and I walked around and looked at all of our dinner options.  There were lots of choices and we settled in at a local brewery.  I got my tenders and we enjoyed a couple of Jack O’ Lantern Ales, which were delicious.  After dinner we decided to do a bit of shopping.  Kim hadn’t done anything “touristy” since moving to NY so it was the perfect chance to do so.  We bought some matching Hello Kitty sweaters at the Sanrio shop and took our time strolling through the city. 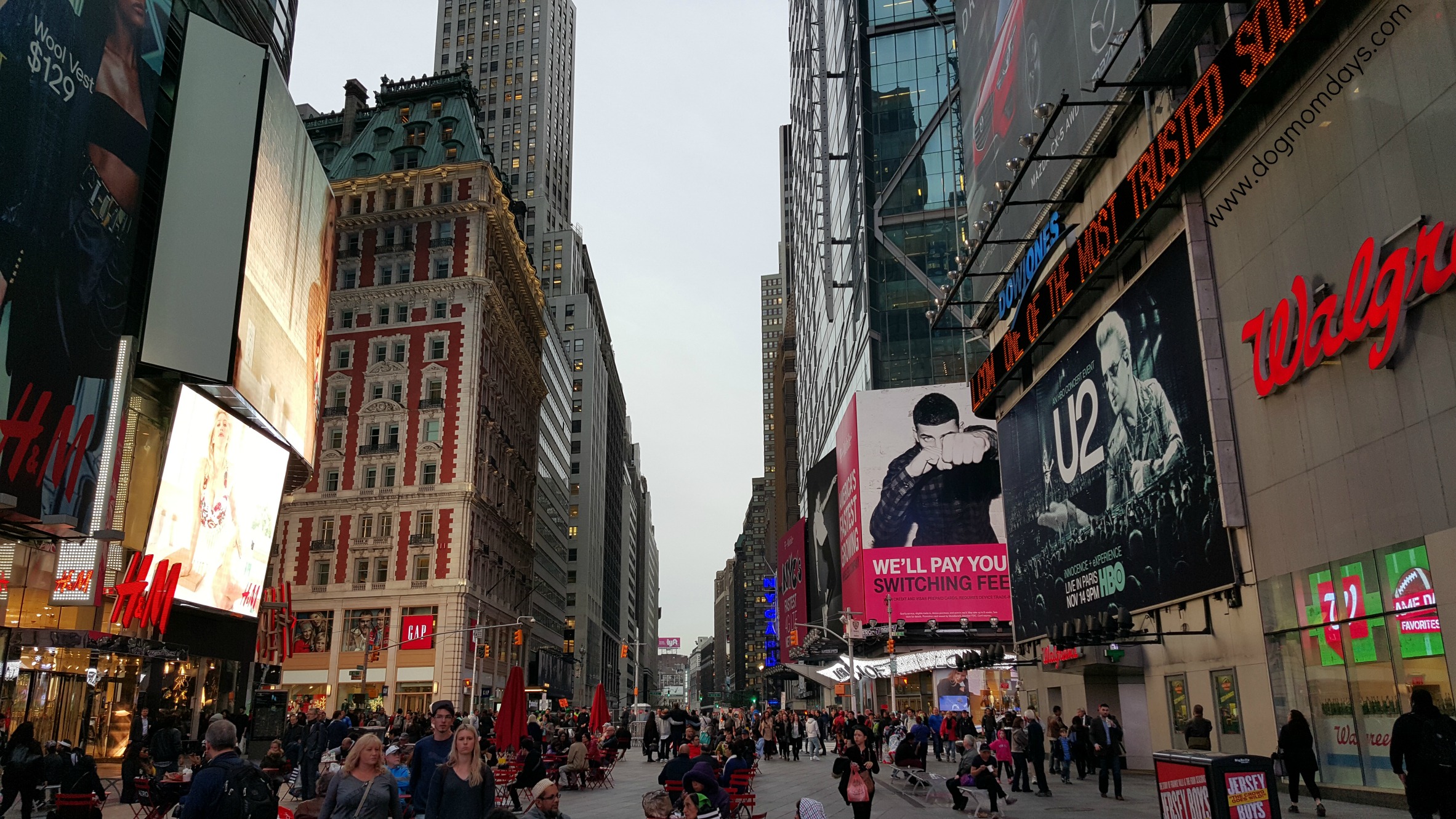 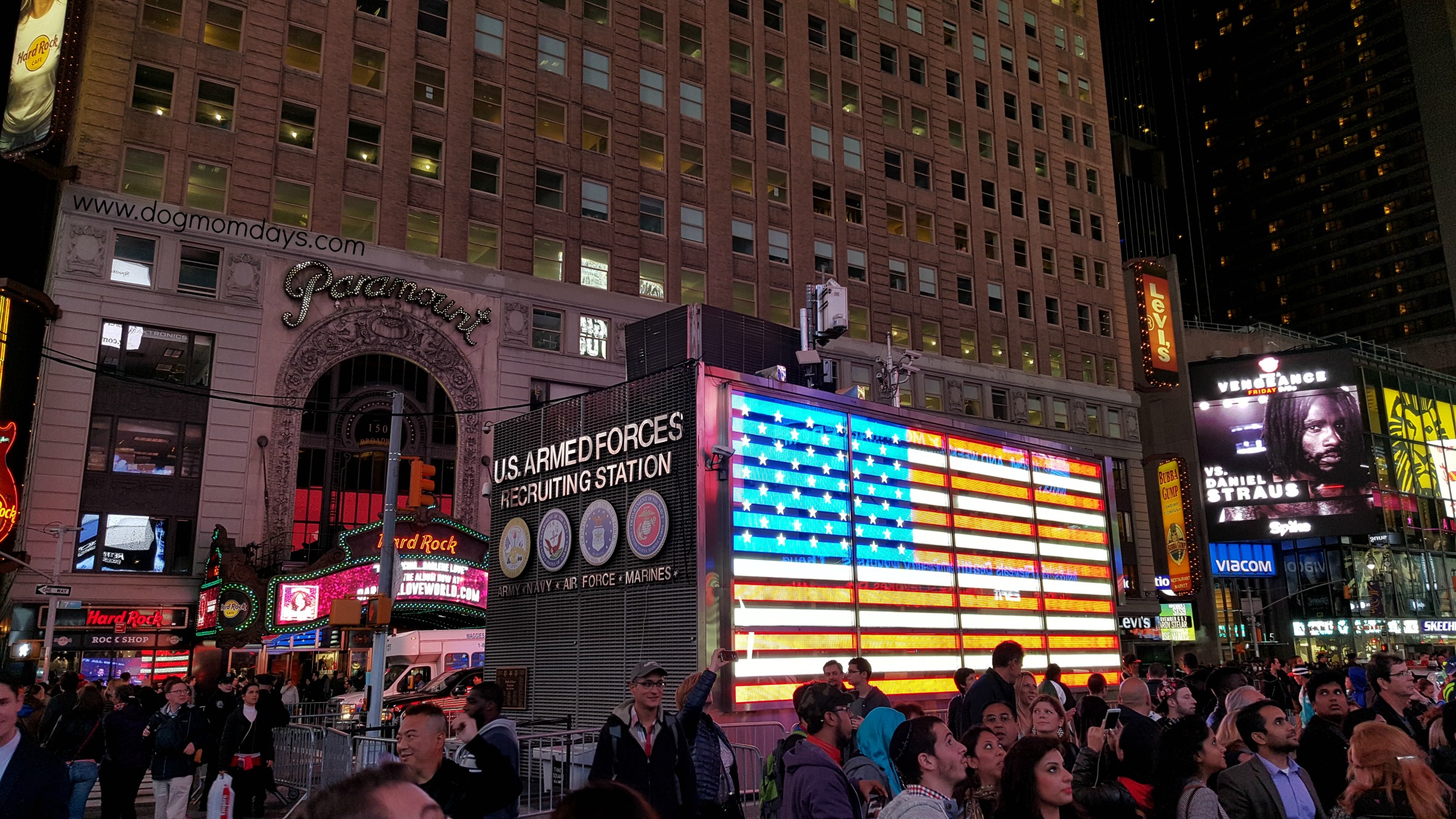 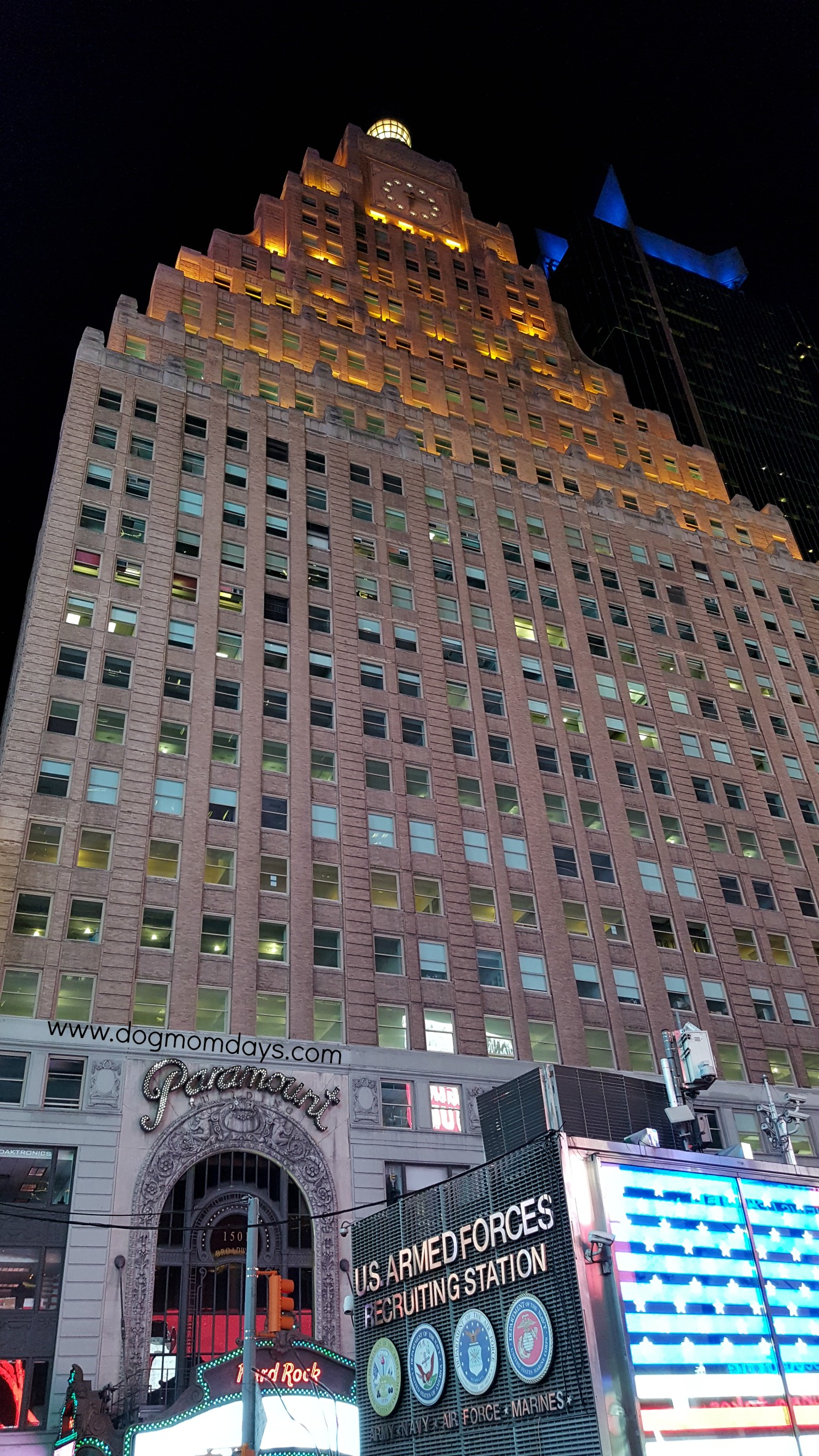 After Kim and I did some shopping, we headed over to Rockefeller Center.  It was actually decorated a bit for Christmas already!  We got to see the famous ice rink and I was able to peak in the windows of where the Today Show is filmed every morning!  The sight was so grand.  It was everything I thought it would be, and more.  Although the Rockefeller Christmas tree wasn’t yet erected, we did get to see a glamorous tree lit above the Radio City Music Hall! 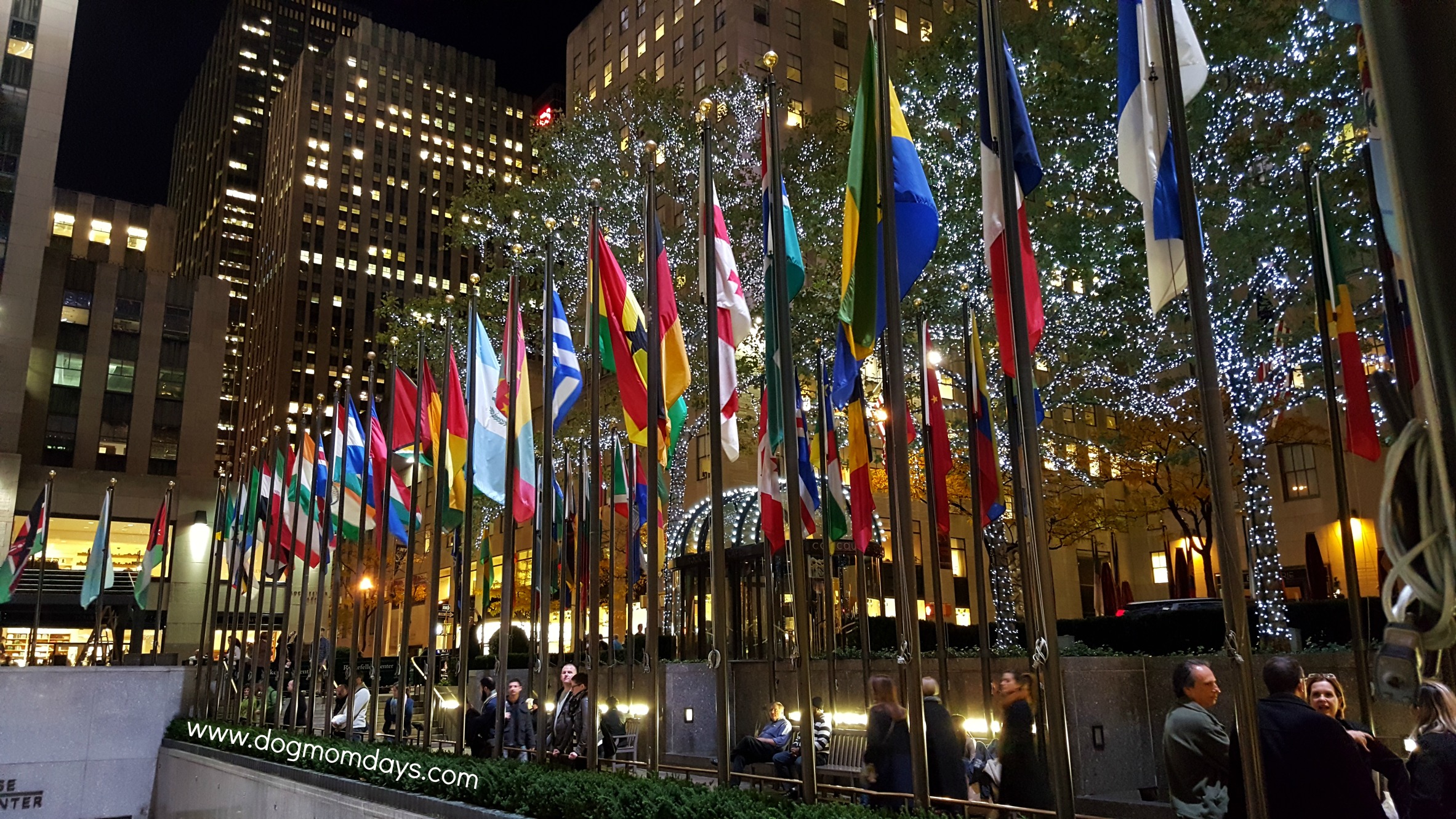 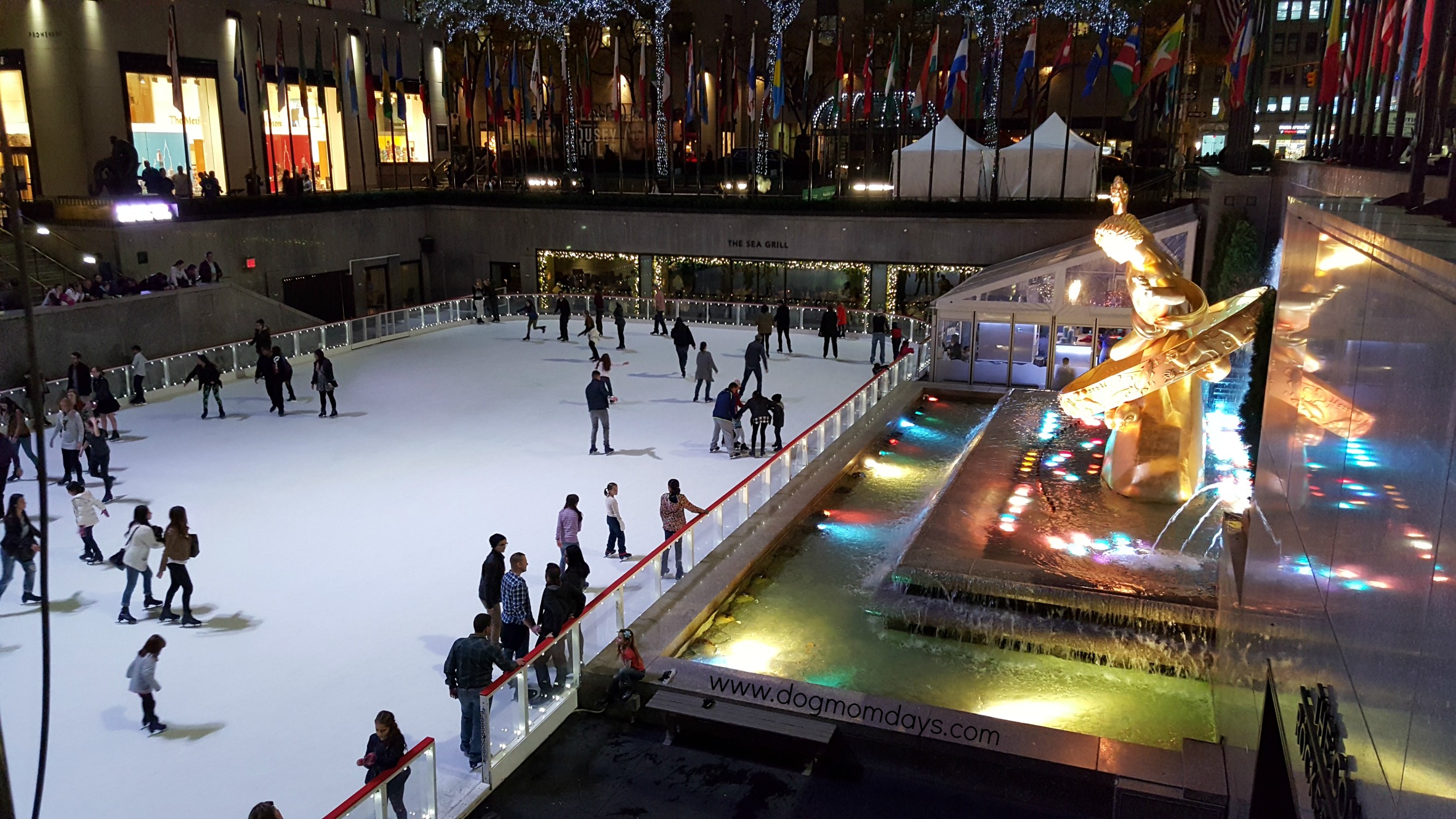 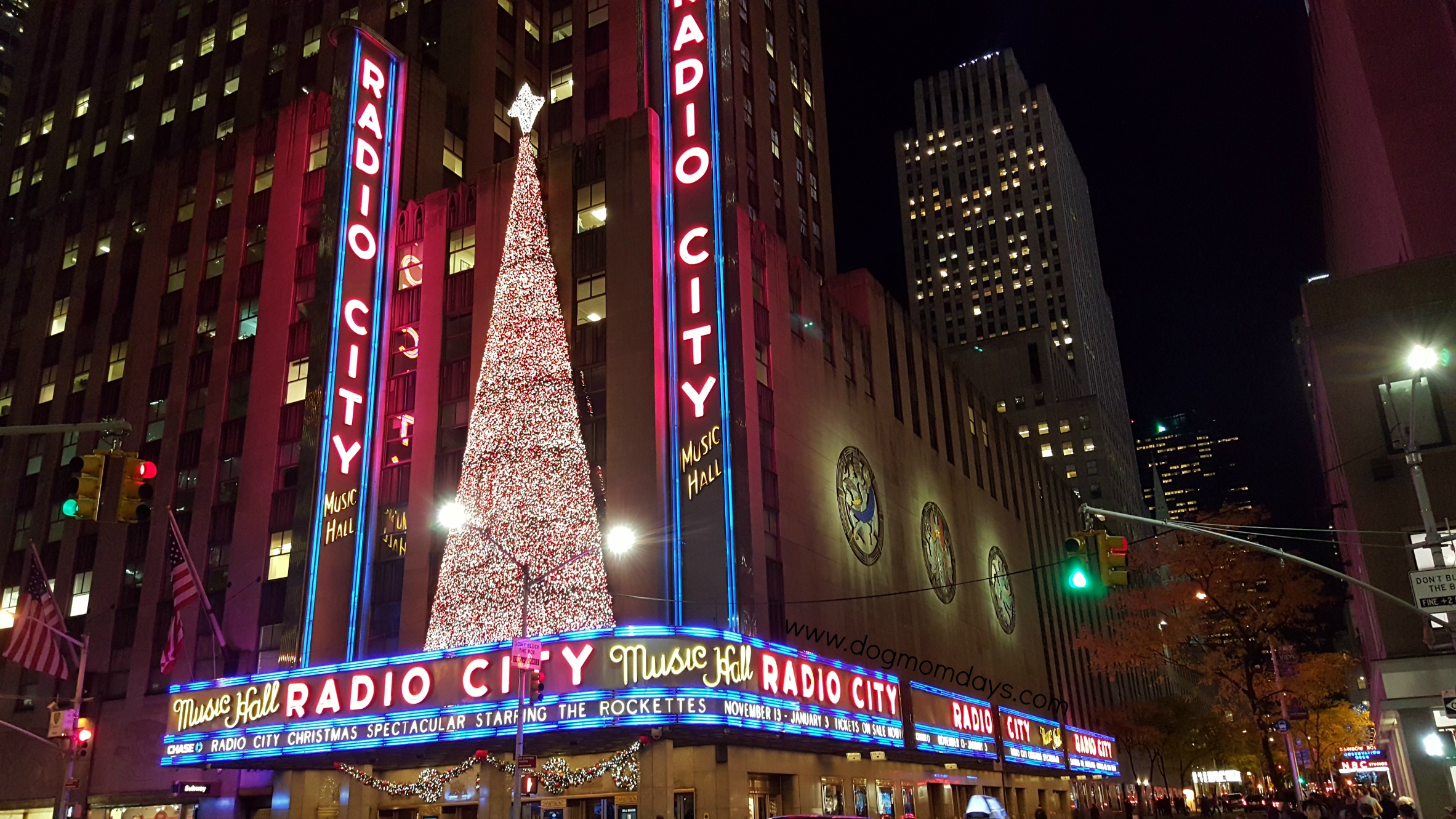 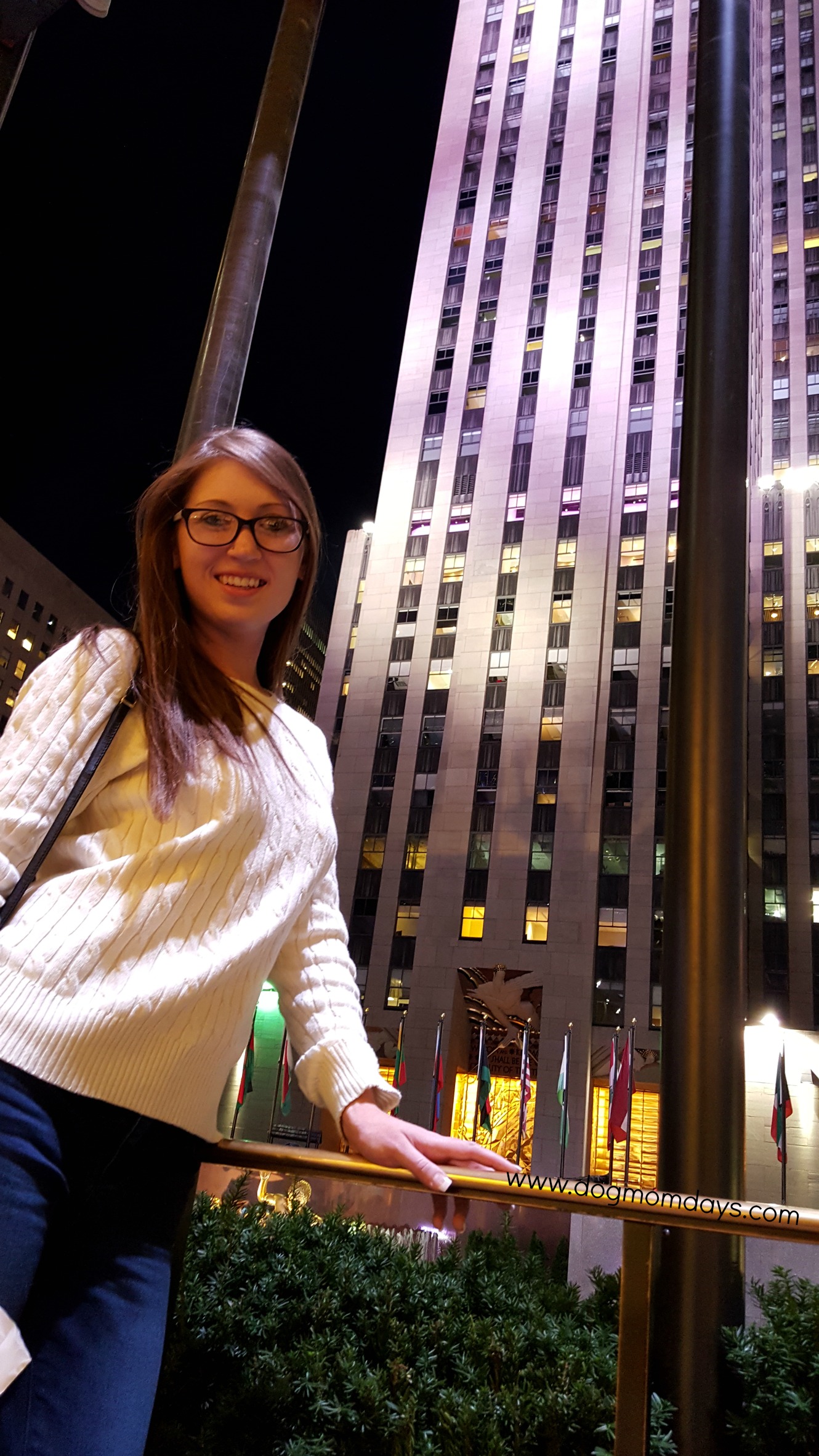 Kim and I spent considerable time exploring the city, then she took me back to my hotel.  I would have gotten lost on the subway if she had left me to my own devices.  I was going to meet with some of my pet blogging friends in the hotel lobby area, so I invited my sister in.  After introductions, we spent about an hour catching up.  It was so much fun and my Monday was complete.  I had the Purina Better With Pets Summit the next day, so I needed rest.  My New York trip was off to a good start.  Now I had business to do 😉 Stay tuned to hear about the summit!