Early this morning I lost my Sammie.  It was a terrible, tragic death.  I watched him decline so rapidly over the course of four days.  It was painful for me, but I can only imagine how painful it was for him.

I adopted Sammie from AZ Piggie Poo Rescue on January 30, 2015, exactly a week after I lost my piggie Kirby.  It was fate that Sammie and I would end up together.  When I researched small animal rescues, I came across AZ Piggie Poo Rescue in North Phoenix.  A week after Kirby passed, I made the hour drive to the rescue so I could donate Kirby’s leftover food and hay.  That day I was introduced to Sammie and I fell in love.  The way he stared at me when I held him for the first time was undeniable.  I took him home the next day.

Gosh, Sammie was something else.  His personality was just so much fun.  He was so full of life and positive energy.  Sam loved running around with the dogs and cats.  He also loved every vegetable on the planet.  Sam was a bigger than average guinea pig, so I had to give him plenty of veggies!

Sammie had a 4×2 area to sleep and eat in, and everyday I took him out to run around the office with the other animals.  I’d have him out for hours at a time.  Since I work from home, I was always right beside my Sam.

I came home from Nashville, TN on Sunday afternoon.  Immediately when I got home I greeted Sammie with some fresh veggies – spinach being his favorite.  He enjoyed them and everything seemed fine.  Matt had been cleaning his area and taking him out to play while I was gone.  On Monday I noticed his breathing was abnormal.  I figured maybe it was just a little bug and he wasn’t feeling well.  By Tuesday his breathing became more rapid so I took him to see Dr. Funk, an exotic pet veterinarian at VCA Mesa Animal Hospital.  Dr. Funk is amazing.  He took care of Kirby for over 6 years so of course I knew Sam was in good hands with him.

Dr. Funk said that Sammie looked and sounded perfectly healthy on Tuesday, although his heart rate was about 220 beats per minute, which is almost 100 over the norm.  We thought that maybe it was the onset of an upper respiratory infection, so Dr. Funk put Sam on Baytril in an attempt to fight it early.

By Wednesday, Sammie was extremely lethargic.  He wasn’t really moving at all.  He just slept and occasionally ate some hay and drank some water.  I started getting really nervous.  I knew that URIs could be fatal for piggies.  He let me hand feed him some hay and he was still drinking water.

On Thursday Sammie stopped eating and drinking completely.  He wouldn’t even lay down now.  It looked like he couldn’t get comfortable and he was in pain.  Instead of his breathing being rapid, it was apparent that he was struggling to breathe.  I took him back to the vet right away.

When Dr. Funk picked up Sammie to listen to his heart, Sam was obviously in pain.  I opted to have X-rays done.  I needed answers.  Was it a tumor?  Enlarged heart?

Well, Dr. Funk showed me the X-ray results immediately.  He showed me that we couldn’t even see Sammie’s heart on the X-ray because his chest and lungs were so filled with fluid from some sort of infection.  This explains why he couldn’t get comfortable – it was probably so painful to lay on that fluid and it also made it hard for him to breathe.  Dr. Funk explained my options and was totally honest with me.  The medication probably wouldn’t help and he most likely didn’t have much longer on this earth.

I took Sam home and continued to syringe feed him critical care food, water and his antibiotics.  I literally sat next to him all day.  Every now and then he’d go to his water bottle and look at it, put his head up like he was going to drink, but couldn’t.  It’s like it hurt too badly.  By the evening, I could hear every breath that Sam took.  He just stared at me, almost to say that he was hurting.

I’ve never felt so much heartbreak.  I watched Sam deteriorate so quickly but I was with him every minute.  I kept syringe feeding him food and water.  I also rearranged his area and put a lot of padding and blankets down so he could try and get comfortable.  I even put a vaporizer right next to the cage and that’s where he spent most of his time.  He would sit right by the hot steam. I put some drops of eucalyptus oil in it so it’d be easier for him to breathe.  I know it helped because he sat there a majority of the time.

I spent my entire day talking to Sam, getting nose to nose with him and telling him how much I loved him.  When I would hold him in a blanket to feed him, I would kiss and pet him, reminding him of how much he meant to me.  I asked him to forgive me if there was anything else I could have done.  I apologized for any suffering or pain he was going through.

I tossed and turned for a few hours last night then woke up to feed Sam around 2am.  He seemed alert because I walked in the room and said his name and he turned to look at me.  He did let me give him some food and water.  I still had an ounce of hope that a miracle would save him.  I sat by his side until 3am.

When I went back to bed, I just kept praying.  I was telling God to please help us through.  I didn’t want Sam to suffer.  I didn’t want him to be in pain.  I also didn’t want to have to make the choice on whether or not to euthanize him because I wanted to give him a chance to recover.

When I woke up at 7am to feed Sammie again, I walked into the room and saw him laying down in front of his igloo.  There was a brief second where I thought “Oh my God, he’s laying down and sleeping!!”  Then I really came to, and knew he was gone.  I put my hand on him to check for a heart beat but there was nothing.  He really was gone.  God helped him – he took his pain away.

I woke Matt up and I just cried.  We prayed by him and said our final goodbyes.  I wrapped him in a blanket in preparation to take him to the vet for cremation.

At 8am sharp, we drove to the vet to drop Sammie off.  By then I had already called and made arrangements.  I chose to get him a private cremation so I can get his ashes back, just as I did with Kirby.

I feel guilty.  Is there something I could have done to prevent this infection?  Was it a bad vegetable?  Was it something in the air?  I cleaned his area every single day and my house is always clean.  I take so many preventative measures to make sure my animals stay healthy.  But it didn’t work this time.

Kirby passed in my arms in January.  He was old – 6 years, 4 months.  I rescued him when he was 4 months old and we had a wonderful life together.  Kirby’s passing was very quick and painless.  It was his time to go.  But with Sammie, it was so incredibly painful.  He was only 2.5 years old and I just wonder how long the fluid was building up or when he got that infection.  I wish I could think about all of the fun we had together but all I can focus on right now is how sad and horrible he looked in his last 24 hours with me.

Rest in peace, my son.  I hope you have fun with Kirby.  I’ll see you again one day. 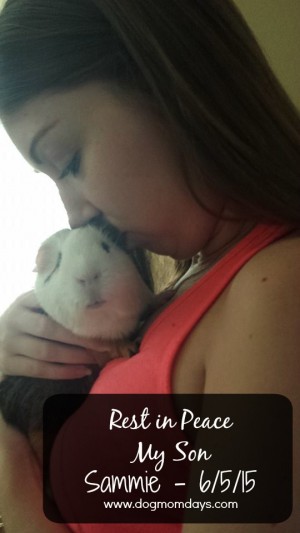