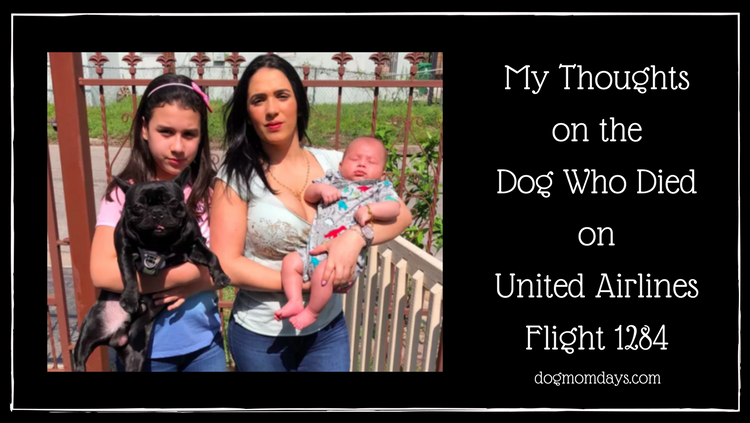 When I first read the article about that poor dog who passed away in the overhead bin on United Airlines flight 1284, I was raging with anger. At first it appears that it was the fault of United Airlines, but in my opinion, they aren’t the only ones to blame.

If you got on a flight with your beloved dog (they obviously mean a lot to you if you’re traveling with them) and a flight attendant ordered you to put your dog in the overhead bin, what would you do? I mean, have you ever seen or heard of a dog traveling in the overhead bin? Do you know how tightly those bins close? How does that even sound safe?

According to the NBC article about the tragic event, the passenger who owned the dog “adamantly pushed back” when she was ordered to stow her dog overhead. She eventually complied. Obviously some piece of her knew it was wrong. Why didn’t she leave the airplane? Why didn’t she ask to speak to another employee, or better yet, the pilot?

And who on Earth trained a United Airlines employee that it’s okay to put a dog in the overhead bin? It’s dangerous enough putting them in cargo for travel. But a bin with no oxygen? Who was this extremely ignorant, uneducated flight attendant? These are the people responsible for hundreds of lives 30,000 feet in the air! And they don’t know that a dog will die without oxygen flow? Why is United hiring idiots? And this was presumed an accident? How?

This is freaking nuts!

To make matters worse, the dog was a French Bulldog. People who own breeds with respiratory issues should know how risky it is to fly with them. Some airlines even restrict these sorts of breeds due to potential issues with oxygen, or lack thereof.

Do I feel bad for that lady? Sure. But I feel worse for that poor dog who’s dead. According to NBC, the dog was barking at some point during the flight. Why didn’t anyone out of the 200+ people on board, including employees, get up to check on the dog? What about the woman? Why didn’t she ask for help checking on the dog? Why people? Whyyyyyyyy?

If I saw someone put a dog in an overhead bin, I would have said something. Maybe like, “That dog won’t survive without oxygen.” And if I heard the dog barking and saw the woman with a baby, I’d get up to help and check on the dog. So many people, so much lack of compassion. And for people who don’t think I’d say something, think again. This is being written by a woman who once told a mom to tell her child to stop torturing her dog at the beach. This is being written by someone who recently told a woman not to hit her dog. I WILL speak up.

The entire situation angers me. Should that passenger sue the airline? No. She made the final decision to put the dog in the overhead bin when she could have asked to speak to other employees, or ultimately left the plane.

Who’s to blame? Everyone. The flight attendant, the owner, and everyone else who could have spoken up.

This isn’t the first time a dog has died in the hands of United Airlines. In 2016, United Airlines had the 2nd highest amount of dog deaths and injuries of any airline. This statistic includes nine deaths and 14 injuries. This is sad and unacceptable. Sign the petition here to tell United Airlines that it’s time to start treating animals better! Investigation is not enough. We need real policy change.

My Suggestions for Air Travel with a Pet

If you see something that you think is wrong, SPEAK UP! You could save a life. Don’t be a sheep and follow the flock. Do what’s right and use your voice for those who don’t have one. I have flown with Wynston several times, and I would never allow myself to be treated how that woman was treated, nor would I standby and watch it happen.