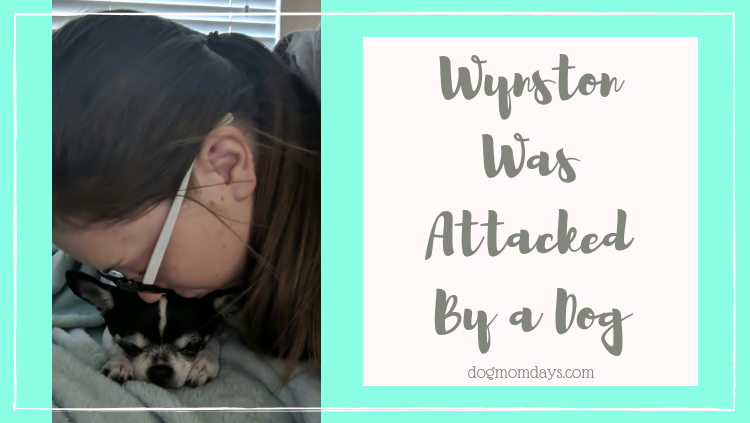 Yesterday on our sunny midday walk, Wynston was attacked by a large Boxer. Our relaxing day turned into one of fear and terror, as we ended up at the vet after Wynston sustained injuries. And boy was it traumatizing…

It was around 11:30am. The weather was absolutely gorgeous and it was time for our late morning walk. I decided to take Wynston on a different route around our apartment complex to switch it up a bit, and I was excited about it. Even Wyn has some extra pep in his step. Who knew it would end up being a massive mistake…

We were just trotting along, minding our own business, when we walked by the door of an apartment where a man was standing out front with his Boxer. Quicker than I could ever respond, the Boxer booked it full speed after Wynston. Wynston, terrified beyond belief, ran like a rocket, attempting to escape the dog. The man started yelling and running after his dog, as they turned a corner, and I was following behind, screaming obscenities.

Finally we caught up to the dogs in the bushes around the building from where the attack first started. The dog had Wynston pinned between a wall and bushes, as the man ripped the dog off Wynston. Wyn was crying and yelping, as I shoved the man and his dog out of the way to grab Wynston. The irresponsible owner kept saying things like, “She just wants to play! She wouldn’t hurt him!” I had a few more obscenities to yell at that point. I was absolutely raging with anger.

When I picked Wynston up I got blood on my hand but I didn’t know where it came from. After carrying him home, I assessed the situation and saw that his left paw pad was torn and bleeding. Wynston went and hid immediately, then started pacing, his tail down. He was clearly terrified and hurting.

After an emotional Facebook live video, I called the vet and brought him in right away. Dr. Beger gave Wynston a thorough exam and found abrasions on his right leg. The paw pad on the left leg was ripped and torn. Dr. Beger remarked how she was so sad because Wynston was trembling and obviously still experiencing fear. She had never seen him like that before. After a convenia injection (antibiotics), receiving an anti-inflammatory medication and a $150 bill, we were headed home.

It took Wynston a bit to relax when we arrived home. I updated Facebook again, as everyone was worried about my son. Eventually he fell asleep and we napped on the couch for an hour and a half.

What makes this attack so much worse is the fact that right now I cannot afford it. It’s been a terrible year. I’m going through a divorce and I’ve fallen on an extremely difficult time. A few ladies suggested setting up a GoFund Me account, and as much as my pride didn’t want to, I needed to ask for help. And our friends came through…

In a matter of two hours we reached our fundraiser goal of $200. This covers his first vet visit as well as a follow up. My disabled cat, Joey, is also sick right now and he needs further tests and imaging. The remainder of what we raised will go to vet bills for my special needs boy. All funds are being used for veterinary care.

I am leaving the fundraiser open right now, because I need the financial help. Vet bills are expensive, especially when they are unexpected. If we raise enough money I will also be able to take Wynston for his annual teeth cleaning, which I haven’t been able to afford on my own.

I have received an endless amount of messages, which I will start to get to shortly. I am so emotionally exhausted that I have gotten behind on my responses. I will also take time to thank each person who has donated individually, as your kindness deserves to be recognized.

Thank you, from the bottom of my heart. You have all made this encounter a little less painful.