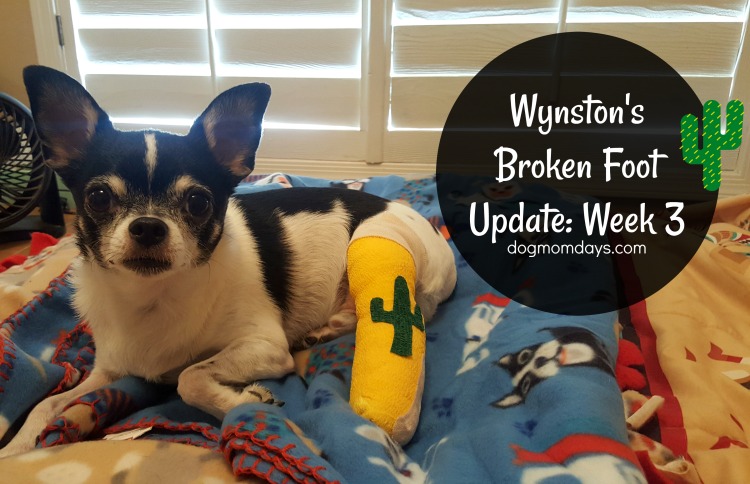 On Monday I noticed Wynston licking his leg profusely when we woke up from a nap. He was trying to get at the inner part of his thigh where the top of the cast was. To me it looked like perhaps the tape had caused a rash. When I saw the redness, I called the vet immediately. They allowed me to email photos of his leg, which I did right away. Within 15 minutes I was at the vet getting Wynston checked out. Luckily I got there just in time because the cast was becoming wet from the licking, at which point it needs to be replaced. They fixed up my boy by removing the tape, putting ointment on the area and covering it with gauze and light tape. I was going to be back two days later for a re-cast so a temporary fix was doable.

This morning I saw that Wynston was licking his leg at the irritation site again. The vet tech at Oasis Animal Hospital told me that the rash had mostly gone away but they still put extra ointment on the area and took care when re-casting his leg. This time his cast is a little thinner and differently shaped. More of his foot is also sticking out. They wrapped it this way because Dr. Salemi wants Wynston to start putting more weight on his foot to assist in the healing process. I did notice that Wynston was walking around more normally when we got home, so I was pleased to see that. I just want him to be comfortable and I pray his foot completely heals so we can avoid surgery.

The best part of his new cast? It has a cactus on it! I mean, how adorable is that?! I love the staff at Oasis. They take such good care of us and make every experience a good one.

Oh, and I bought Wynston a new blanket at Walmart after going to the vet – it has puppers on it and it only costed $2.50. I couldn’t resist 😉