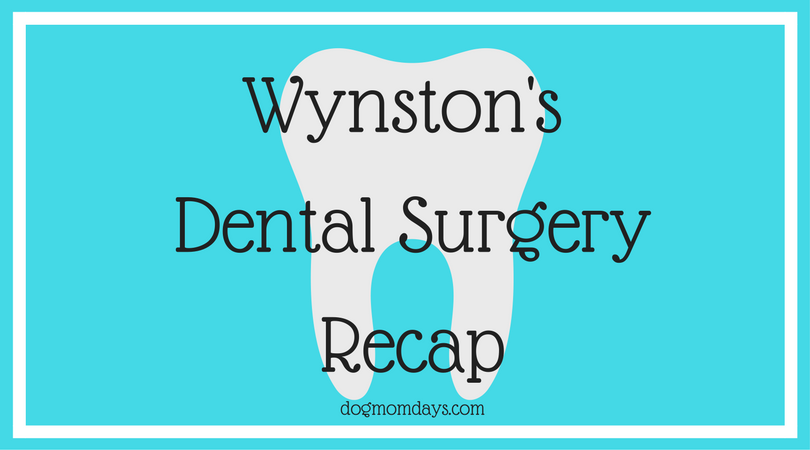 “Wynston is awake from anesthesia, and recovering. Surgery went well.” The words every pet parent wants to hear. I got the call around 11am from Dr. Knott, one of the amazing veterinarians at Oasis Animal Hospital. I had dropped Wynston off at 7:30am for dental surgery, and I couldn’t wait to have him back in my arms. “You can pick him up at 1 o’clock.” I pulled into the parking lot at 12:57.

Today was Wynston’s first dental cleaning ever. I knew he needed at least one tooth removed so I was prepared for that. I was also prepared for a $1200 bill. It sure is expensive to take the best care of animals…

The first call I got from the vet this morning was to tell me that Wynston was going in for x-rays. The second call I received was to inform me that he needed four teeth extracted. “Okay, well, let’s definitely do it,” I said, as I proceeded with, “How much more will that cost me?” I was pleasantly surprised with the response from the vet tech on the other end of the line, “Actually, a lot less than you expected!” Oh wow, okay! At least there’s some good news!

When I waltzed into the vet around 1pm to pick up my baby boy, I was super relieved that it was all over. After taking care of financials, I had a very educational chat with the vet tech, Reanna (whom I absolutely adore). Here’s what Wynston had done:

Here’s what I learned:

At first I felt like a horrible mom because I was thinking “OMG FOUR TEETH REMOVED! WHAT DID I DO WRONG?” But turns out, I did nothing wrong. It actually isn’t as big of a deal as I was making it. Now Wynston won’t be in pain, and I can continue taking good care of his other teeth. I was pleasantly surprised with the “before” photo of his teeth. I have seen soooooooo much worse.

This past month I’ve noticed that Wynston has slowed down eating. I think it was hurting him. He’s also been much less likely to want certain treats. I’m so happy that we have the means to get dental work done for our kids, because I know what it’s like to have bad tooth pain! I definitely don’t want any of my animals to suffer from it.

Pet dental health is important to me and this was my first personal experience with dog teeth cleaning. I’m glad I know more now, and that I became more educated on the matter. The vet sent me with photos of the x-rays, diagrams and notes so I can review exactly what Wynston went through. I appreciated leaving the animal hospital knowing what happened in my boy’s mouth and what I need to do for his future dental health.

Wynston is recovering well, although he’s still pretty out of it. We have pain meds to start tomorrow, and I’ll be giving him soggy dry food or wet food for the next two weeks. I have specific post-op instructions that I’ll be closely following. We have a follow-up appointment in two weeks as well.

Thanks to everyone who sent us prayers and good vibes for Wynston’s procedure!

(Also for those who were wondering, my estimate was anywhere from $700-$1200, which we thoroughly went over before the procedure was even scheduled. The entire cost only ended up being about $630!)