I have to say, Wynston’s resume is quite impressive.  Now, it’s not as impressive as some of my other friends’ dogs, but I’m VERY proud of Wynston for doing everything he does.  I couldn’t be happier with how far he’s come.  He makes me one proud mom.

I delved into Wynston’s “career” in spring 2014 when we started agility.  I always wanted to do agility and Wynston loves it.  We have a lot of fun and compete in trials from time to time.  We’re taking a break right now because it’s so hot and the heat flares Wynston’s tracheal collapse.  Our house is big enough to practice tunnels and jumps inside, so we’ve been keeping up on our training!

Anyways, in May 2014, Wynston got discovered by Pro Plan on Twitter, after I posted a photo of him at agility class…and the rest is history!  By June we were attending the Purina Incredible Dog Challenge in California as VIP guests and since then Wynston has been a spokesdog for the company.  We love and cherish our relationship with Pro Plan! 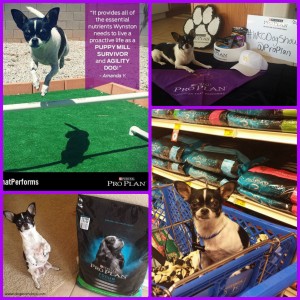 In October 2014, Wynston did a photo shoot for the Martha Stewart Pets spring clothing line for PetSmart.  It was a very nerve wrecking but fun experience.  I mean, it’s PetSmart.  Everyone knows what store that is and pretty much everyone shops there nationwide!  This was a HUGE deal for me.  Wynston did really well, considering that at one point he was scared to be around people.  Now he was sitting and staying in front of several people with lights flashing and cameras clicking.  I literally screamed the first time I saw him on the PetSmart website.

Wynston had a photo shoot this May for some Martha Stewart Pets and PetSmart brand clothing, including Halloween costumes.  I have to say, he did not like the hood he had to wear for his dragon costume, but man did it turn out adorable!  I love the photo shoots because I’m with my friends (who I made through animal acting and agility) and the crew and photographers are always very nice and patient.  Some days Wynston does well with the modeling, other days he’s just not into it.

We did not expect the Halloween costumes to be out so soon but they have appeared on PetSmart.com!  Yes, I’m bragging about my boy – he looks absolutely handsome.

When it comes down to it, it brings tears to my eyes to think about the fact that he was once afraid of his own shadow and now he’s rocking this whole life thing!  He’s the perfect example of what rescue dogs can be – amazing, confident rock stars!

Has your dog done anything that you are really proud of?  It can be as simple as mastering a fun trick!