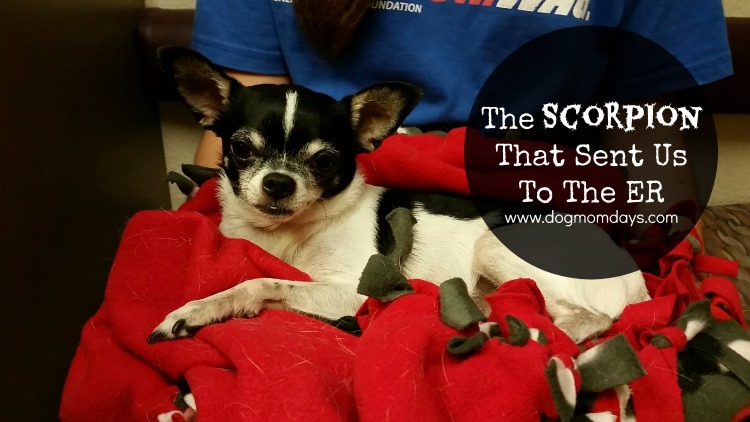 Summer is (very) slowly winding down. Temperatures are in the low 100s during the day, which is a huge step in the right direction for us Arizonans. Even better is when cold fronts come in to bless us with even cooler weather. A good example was Saturday night. Matt and I decided to walk Khloee, Wynston and McKenzie Rae over to our local park. What was supposed to be an enjoyable evening outside turned into a trip to the animal emergency room.

Matt and I agreed to take a new route to the park because we like to explore our new neighborhood area. We arrived after only a five minute walk, and all of us were definitely loving the cool breeze and scenery. Once we let the girls run around for a bit, we headed home on the street behind our house. As we were talking about how we could see our big trees from our backyard neighbor’s lot, Wynston let out a loud yelp. It wasn’t a brief, one time yelp. This was a painful, lingering cry. He immediately began nursing his left back leg and he wouldn’t touch it to the ground. I picked Wynston up and didn’t see anything. The five of us had been walking totally normally and the incident was completely random. As I attempted to look over Wynstons leg and paw, I noticed he cried more when I got near his inner paw pads. Great. We rushed home.

When we arrived at the house, I set Wynston down inside to see what he would do. Indeed my worst fear came true – Wynston still wouldn’t put his leg down. I picked him back up and Matt and I took him to our bathroom for further investigation in the light. We couldn’t see anything wrong but that didn’t change the fact that Wyn was still crying.

Our Trip to the ER

After Googling “emergency vets near me,” we gathered our things and hopped in the car for the one mile drive. Less than 10 minutes later we found ourselves at 1st Pet Veterinary Center. I carried Wynston in his blanket the whole time, trying not to put pressure on his leg or paw. A receptionist greeted us with a smile right away and we had maybe a minute or two of wait time before a veterinary technician called us back. I have to add how friendly everyone was. Despite the late hour, the entire staff was happy, kind and extremely helpful. I’d definitely go back to that facility.

Anyways, Wynston’s vitals were good so that was a positive sign. The tech informed us that they see a lot of stings and bites at night, which made me feel better because I know they see issues like Wynston’s a lot.

When the doctor came in, she was very gentle with Wynston. She recommended taking him to administer a dose of pain medication while looking more closely in between his paw pads. We agreed without hesitation.

About five minutes later, the doctor brought my little boy back and he was already starting to nod off to sleep due to the medicinal side effects. His leg had been shaking violently from the incident but it was finally calm and Wynston didn’t seem to be in pain anymore. Thank goodness for pain medication!

After assessing the situation, the doctor suspected a scorpion sting. She didn’t see any evidence of anything else, and scorpions won’t leave a red mark or anything like other bugs will. His bones and joints all seemed to be fine. Her second guess was that he fractured a toe but she suggested only doing x-rays if he wasn’t walking within 24 hours. With some tramadol (for pain) in hand, we left the emergency vet in less than an hour.

By the time we got home, Wynston was completely lethargic. I hated to see him like that but I’m glad he wasn’t crying from the pain anymore. I made the decision to sleep in the guest bed with him so I could wake up with him if necessary. I also wanted to make sure none of the other animals were going to jump on him or disturb him in the night.

Wyn woke me up at 3am and by then he was already walking on his leg. I spoke a “thank you” prayer to God because I was so grateful for the quick improvement. Wynston didn’t want to go potty but I gave him some food to get something in his stomach. He quickly went back to sleep until we woke up again around 7am. At that time, he was still walking normally and he went potty outside.

A couple of hours later I decided to give Wyn a dose of his pain medication. I also cooked him bacon so he’d have a full tummy. (Plus every dog that has to go through something like that deserves bacon!). He even played a little bit before slowly nodding out again from the medication. Then off to sleepy land he went.

The monsoon season in AZ brings out a ton of scorpions. It’s not uncommon to see them scurrying along the sidewalks at night. I think we were just in the wrong place at the wrong time and one happened to get Wynston. I feel so terrible that a nice walk turned into a really painful experience for my boy. Typically I’m aware of where we are walking but scorpions are fast and when it’s dark they can be easy to miss. I’m glad now I have some puppy pain meds in case this happens again and I also know what to look for in the future. Wynston was recently in the ER due to a severe allergic reaction so let’s hope that we don’t have to go back for a very long time.