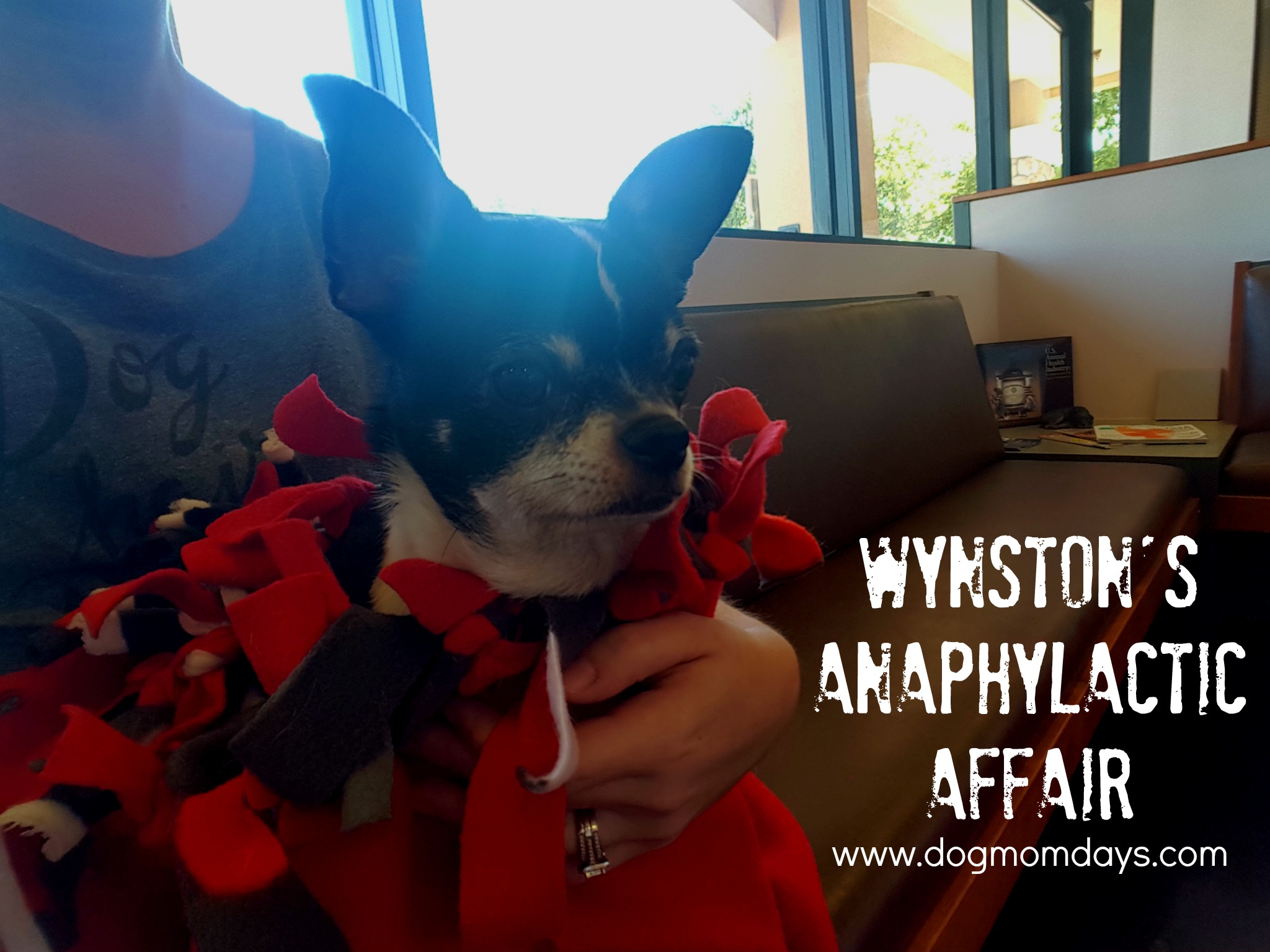 I’m not sure how it is for human moms, but I know as a dog mom I like to think my dogs are invincible. Like…they could never get lost or get hit by a car or break a leg or have a life threatening anaphylactic reaction. So isn’t it a bitch when we find out that perhaps our animals aren’t invincible? Most of you know that I’m a really overprotective dog mom. I take zero risks when it comes to my animal’s health. If they aren’t feeling well, straight to the vet we go. And such was the case this morning.

Today I slept in until 8:30am, which is late for me. In the past couple of months I’ve been getting up anywhere from about 6:30 to 7am. It’s nice during this time of year because it’s so bloody hot outside and if I want to do anything outdoors I have to do it at the ass crack of dawn. Anyways, I had a rough day of back pain yesterday so I think that’s why I ended up sleeping later than usual. Wynston and Khloee always sleep until I get out of bed. This morning as soon as I started to wake up and rustle the bed covers, Wynston began crawling his way out of his little cozy comforter cave. Half asleep, I walked with Wynston and Khloee to the kitchen so I could give them their daily dental chew. (McKenzie Rae was already awake with her dad). Matt came out of the office to greet me at the couch and Wynston sat right next to me. Matt abruptly exclaimed, “Look at Wynston’s face! It’s really swollen!” Attempting to come to, I wiped my eyes and took a closer look. Matt was right. Wynston’s cheeks and chin were extremely swollen and he had large, puffy bumps on his head. Oh dear God.

I began to feel around on Wynston’s head and he seemed fine. He ate his dental chew like normal and he didn’t seem to be in pain. As I felt around his chin it literally seemed as though the skin was sagging to the ground. I called the vet immediately.

I’ve been going to Oasis Animal Hospital for over five years now. I take all of my animals there. I discovered it when I was living in a studio apartment about two minutes away from the hospital. Little did I know that five years later I’d buy a home on 1/3 an acre a minute from Oasis and that apartment. Funny how life goes full circle, eh? Anyways, the clinic told me to come in immediately so I threw on some clothes, brushed my hair and grabbed my little boy with his blanket. Then we made the grueling one minute drive. 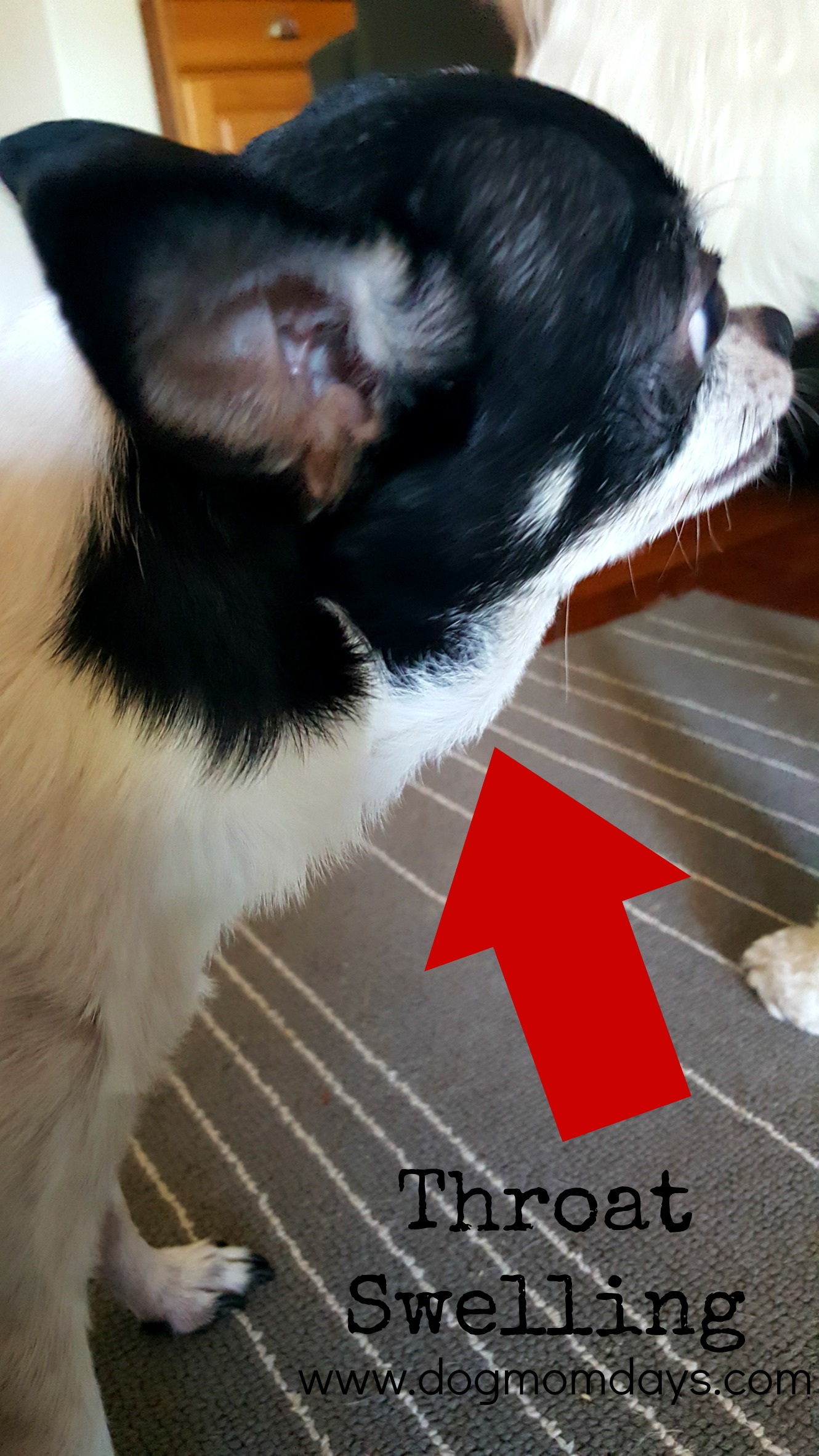 The receptionist told me they would “work me in” but upon seeing Wynston’s symptoms, a doctor saw him immediately. Praise God I took Wyn in asap because by the time we got into that vet room, not even 20 minutes after my initial phone call, Wynston’s throat was closing. He was having an anaphylactic reaction.

Anaphylaxis is a serious, life-threatening allergic reaction, according to the American Academy of Allergy Asthma and Immunology. The most common human allergic reactions are from food, insect stings, latex and medications. Turns out, it’s almost the same for animals. After a brief but thorough examination, the doctor found two small red bumps on Wynston; one on his chin and one inside his cheek. The doctor quickly explained to me that Wynston needed to be hospitalized immediately for an anaphylactic reaction which was most likely caused by a bug bite. Trying to control my panic, I signed all the papers and handed my boy over the the vet techs. I know he’s in the best hands at Oasis Animal Hospital but that doesn’t make it any easier for an overprotective dog mom like myself.

Since moving into our new home, Matt and I have noticed a plethora of nasty bugs. We knew the house had a bug problem upon closing. The home had been vacant for a year and when we did the inspection we saw lots of spider webs around the outside of the house. I called Arizona’s Best Pest Control to come out and service the home the day before we officially moved into the house. They did a great job and bugs were dying immediately. We’ve still been finding bugs but luckily they are dead. There was even a beehive beneath our back shed that we had removed before moving in.

Despite the great pest control service (that we’ll continue having monthly for the first few months then bi-monthly after that) there are still bugs out and about in the yard. We have lots of beautiful landscape and trees, which is a haven for icky insects. There’s no way we can keep all the bugs off of our property but I really wish I knew exactly what happened to Wynston. He’s not one to go after bugs or try to eat them but clearly something didn’t like Wyn being in their way…

A few hours after dropping Wynston off for hospitalization I got a call that he was stable and the swelling had gone down on his face. His chin and throat swelling was still the same but thankfully it wasn’t getting worse. Around 3pm I got another call that Wynston’s condition was good enough for me to pick him up. I went straight to Oasis to collect my little man.

Wynston was absolutely beside himself when he saw me. It was that “Oh thank God my mom is here because I was going to die otherwise” look. The first thing I noticed was that the large swollen bumps were no longer present on his tiny apple head.

Wynston’s injections that were administered at the vet:

Symptoms to look for in the coming days:

When I got Wynston home, the first thing he did was go potty…for a long time. He wouldn’t go at the vet which didn’t surprise me because he was probably too scared. I then fed him dinner, which he gobbled up quickly. About 20 minutes later, Wyn went into the guest bedroom and laid on the floor. His breathing was abnormal. I called the vet immediately. While I was on hold, he vomited twice. The vet recommended I take him to the emergency vet but after throwing up he seemed to be feeling much better and his breathing was back to normal. Thank you Lord.

Today while Wynston was in the hospital, I kept my mind occupied by running some errands. My first stop? PetSmart of course! I had to get my boy a new toy so I picked up a crinkle turtle and apparently crinkle turtles make everything okay! 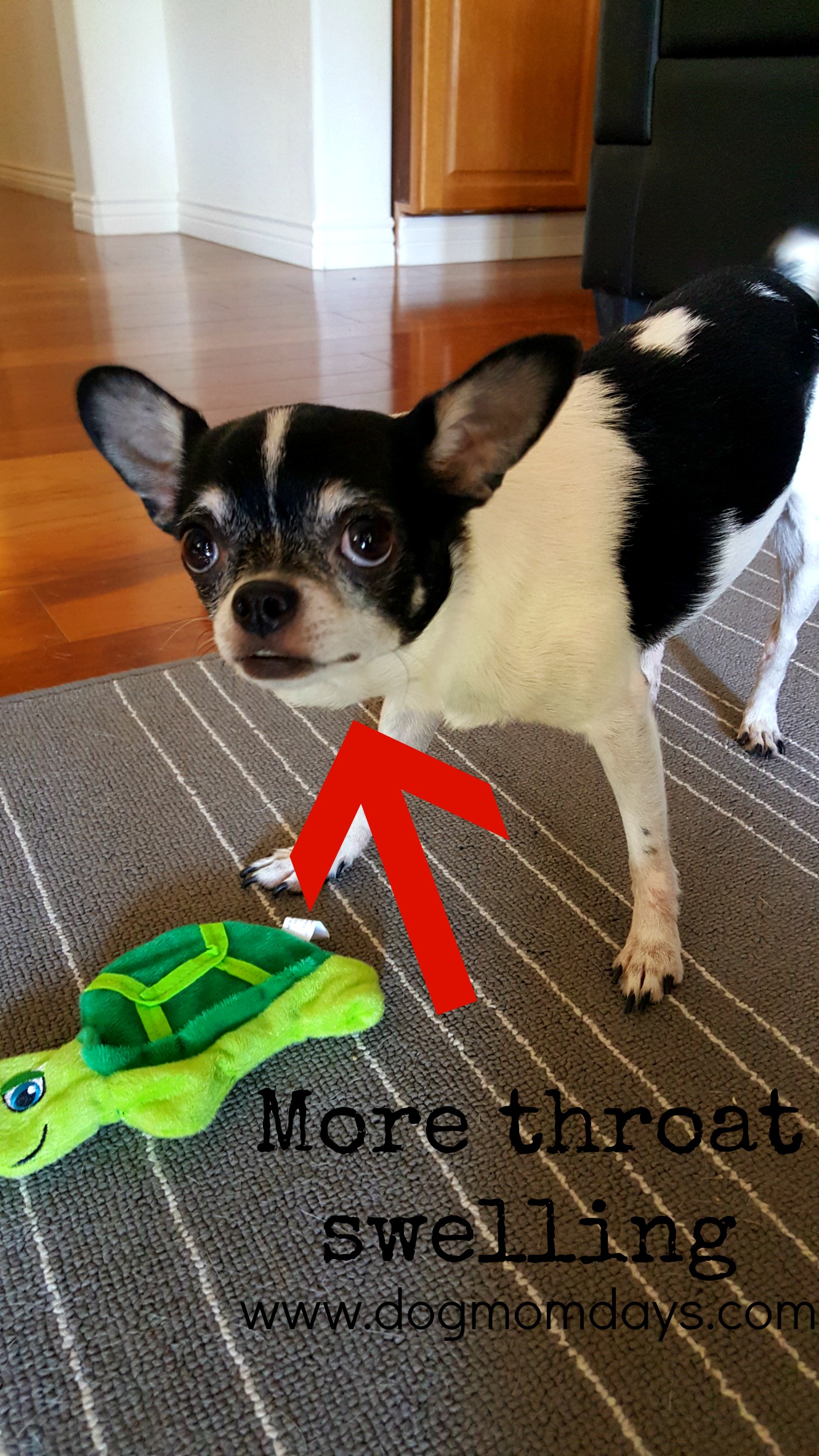 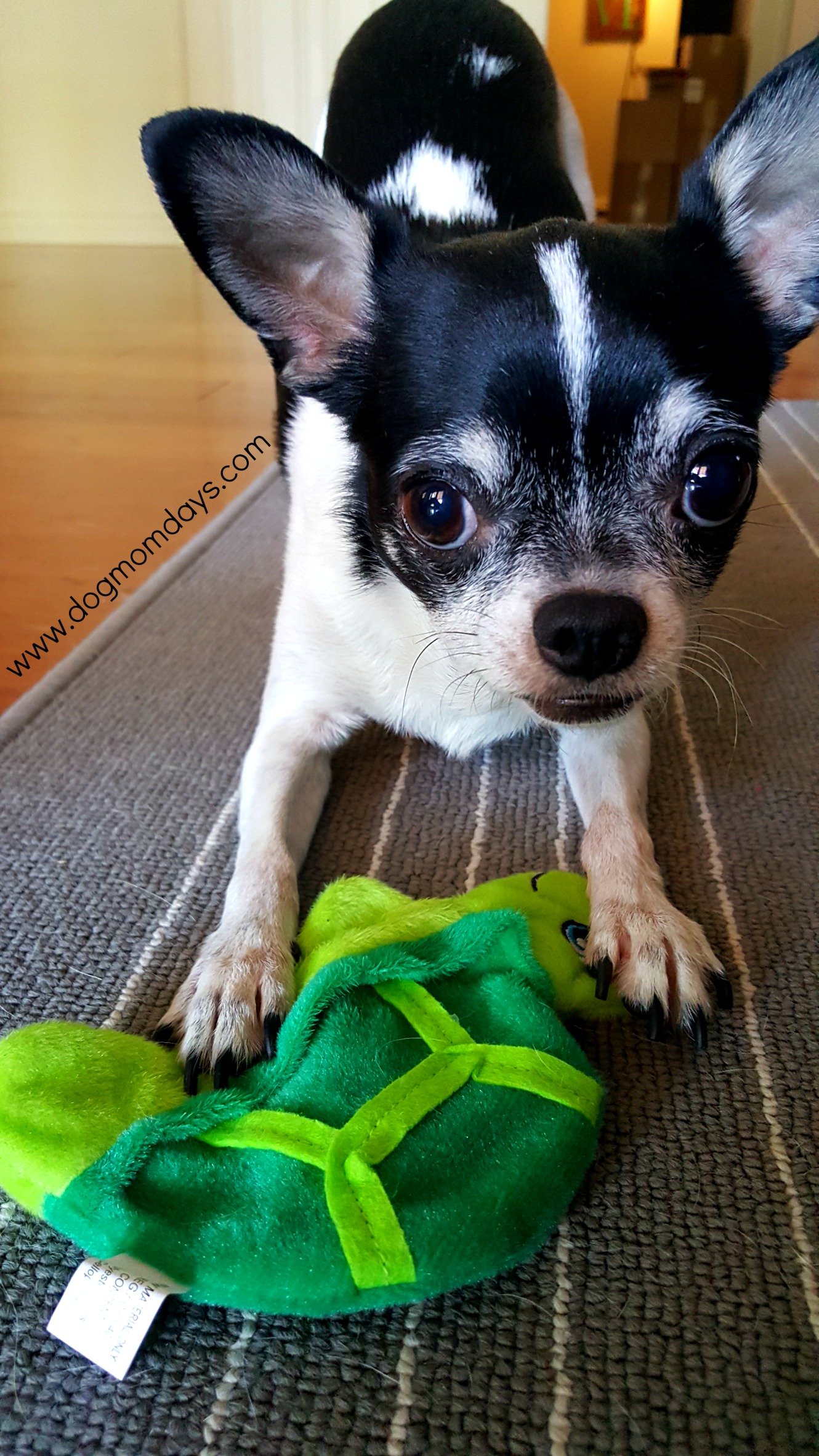 Wynston is acting normally for the most part. I’m keeping a super close eye on him because like I said earlier, anaphylaxis can be fatal. We’re heading to California this weekend (assuming Wynston is healthy enough to travel) so we’ll be taking his treatment plan on the road.

Thank you for all of the messages, prayers and positive thoughts you all have been sending us today. You know how much of a wreck I become when my animals aren’t well. I will keep you updated on Wynston’s condition as the days go on.

Has your dog ever had a bad allergic reaction to something?