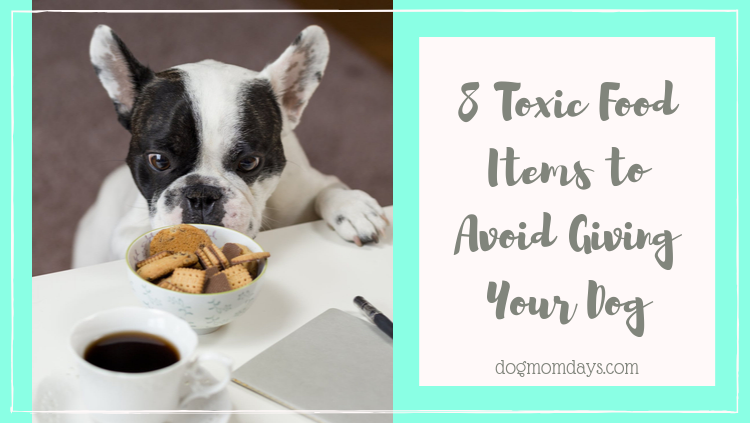 Do you know that common household items cause almost 214,000 cases of pet poisoning every year? It seems natural to think that your dog can eat whatever you serve yourself. Unfortunately, your well-meaning generosity can often lead to unexpected—and even fatal—consequences.

Safeguard your pooch’s health by familiarizing yourself with the most common household items that are toxic to your dogs.

Xylitol is an alcohol substance that is found naturally in most plants, such as fruits and vegetables. Commercially, they are used as a substitute for sugar to sweeten products like gums, mints, and candies. They are also extracted for medicinal purposes.

While xylitol is useful in unique ways to humans, like preventing tooth decay, it’s very harmful to dogs even in small amounts. When a dog ingests xylitol, their blood sugar drops, and there’s a big possibility of eventual liver failure.

If your dog is lazier than usual, walks like they’re drunk, or eventually throws up, these can be telling signs that your dog has eaten something with xylitol.

It’s sad to think your dog can’t enjoy chocolates as much as you do. Chocolate contains the substance called theobromine, which dogs have a hard time metabolizing. Ingested in huge amounts, it can easily build up in their system, causing poisoning.

The amount of theobromine in chocolate depends on the type, and its effects on the dog also depend on the size of the pooch. Therefore, the same amount of chocolate fed to a chihuahua and to a great dane will have different results.

Mild exposure to theobromine can cause an upset stomach or a little vomiting and diarrhea. But lethal poisoning can result in muscle tremors, seizures, and even internal bleeding and heart attack.

Caffeine is found in coffee and its derivatives, tea, and soda, among others.

Dogs are more sensitive to the effects of caffeine than humans are. Even after one or two laps of any of the above mentioned, your pooch can show signs of caffeine poisoning one to two hours after exposure.

Initially, your dog can get restless and hyperactive, then they will start to vomit, their breathing quickens, and they get muscle tremors and can go to seizure and collapse altogether.

Although the raw-diet movement has gained traction over the years among some dog owners, veterinarians and scientists still say you should think twice about joining it.

Proponents of the movement argue that like their ancestors, the wolves, dogs have plenty more to gain from the raw diet that their evolutionary cousins have naturally. But veterinary organizations like the American Animal Hospital Association and the American Veterinary Medical Association recommend against this form of feeding.

It places the dog at risk of food poisoning from ingesting disease-causing bacteria like Salmonella and E. coli. Add to that the possibility that the dog can also become a carrier of these harmful pathogens.

If it’s something that you still want to try for your dog, read about raw-diet safety guidelines here.

Yeast dough and baking products undergo chemical reactions that can wreak havoc in your pooch’s system when accidentally eaten. For instance, when yeast dough rises, it expands. When that process occurs within your dog’s stomach, it can stretch the muscular walls, causing pain.

Additionally, alcohol, which is a by-product of fermentation, can cause alcohol poisoning.

Onions, garlic, salt, cocoa powder, and nutmeg can cause varying levels of gut irritation and may even lead to damage of red blood cells. This is why it’s important to be mindful of the regular food items that you may accidentally feed your dog. Leftover pizza and Chinese food takeouts, sauces, and gravy may contain these harmful ingredients.

However, it’s important to note that not all spices are toxic to dogs. In fact, basil, cinnamon, ginger, parsley, and turmeric are safe for your dogs to eat and possibly even have beneficial health advantages.

There’s a lot of confusion around whether you should feed your dog some fat trimmings. There’s worry about putting them at risk of developing heart and coronary diseases from excess cholesterol.

But the truth is, most fats (no trans fat) are okay for dogs as long as you don’t overdo it. Excess fat in dogs can lead to kidney failure, liver damage, as well as pancreatitis.

In the case of bones, most dog parents worry about the splinters hurting their pooch. It may also cause cuts on the walls of the mouth and the digestive system. As much as possible, if your dog likes to chew on stuff, provide a better alternative, like toys, treats, and safely-sourced chews.

Dogs can eat certain kinds of nuts, mostly if these are unsalted. Your dog can eat peanuts, almonds, and cashew nuts. However, certain types must be avoided, like the infamous macadamia nuts or black walnuts. Just within 12 hours from ingestion, your dog can display all signs of poisoning, like vomiting, diarrhea, seizure, and generally, weakness. In some cases, macadamia nuts can cause canine death.

On another note, because dogs can’t chew nuts as well as humans do, nuts can become choking hazards and sometimes cause intestinal blockage. 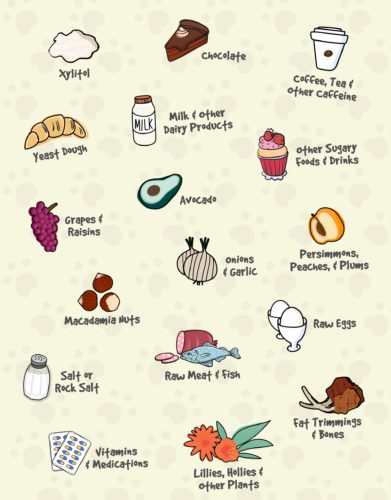 It’s hard to ignore Fido’s pleas for human food, but you have to be extremely careful when offering scraps from the table. Giving your dog a toxic item could mean the very worst outcome, but it’s a highly avoidable situation. Remember to tell your house guests to avoid giving your dog any human food unless they ask you first. This is especially important during the upcoming holidays.

We hope this guide was helpful to you, and happy chowing!

*This guest post was written and sponsored by our friends at Pawstruck!