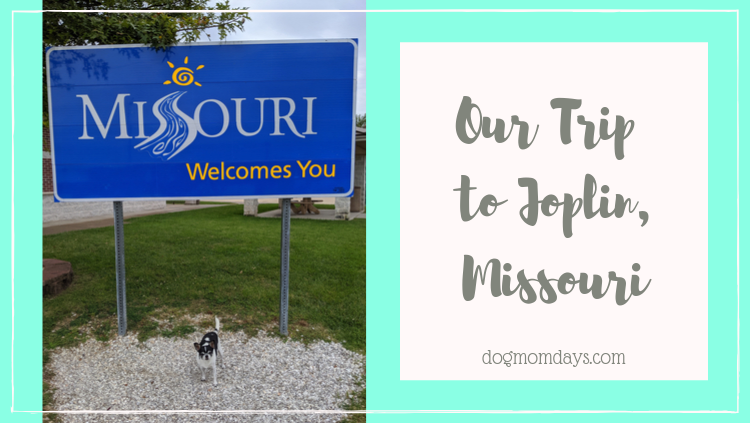 I am a history nerd. Growing up my dad was always giving me “history lessons,” and it’s something I took with me into adulthood. In 2011 I graduated with a Bachelor’s degree in history and culture from Arizona State University. Now, although I don’t use my degree, my love for history will never die. There are a few monumental historical events that I’ve preferred to focus my studies on, but recently I’ve become slightly obsessed with the Bonnie and Clyde story.

My fascination with their tale brought Wynston and I all the way to Joplin, MO to check out some artifacts of Bonnie Parker, and the trip was much more exciting than I anticipated.

Our Visit to Joplin, Missouri

Our day started in Claremore, OK. We woke up to rain, which always invigorates and motivates me. I had been wanting to go to Joplin, MO for a  couple reasons: 1) it would be the 11th state we’ve visited in 2019 and 2) I knew there were some Bonnie Parker and Clyde Barrow artifacts at a local museum. Joplin, MO is only 1.5 hours from Claremore, OK, so it was an easy trek from our location. Wynston and I hit the road, and ended up in Joplin nearly an hour later.

Before going to Joplin, I did some research on the general area, as I always like to do before I travel. I wanted a destination to start with, and for us that was the Joplin History & Mineral Museum. I knew the Joplin Museum Complex housed Bonnie Parker’s necklaces and a door from an apartment that they live in nearby. Unfortunately dogs aren’t allowed in the museum, so when we arrived I parked out front and let Wynston go potty. Then I put him in the car and walked inside the museum. (Don’t worry – it was cool outside, the windows were cracked and the front receptionist was watching Wyn in the car).

Admission for the museum was only $3. I told the receptionist that I was there to see Bonnie’s necklaces. We began chatting, and the woman (her name was Ryan) told me that Bonnie and Clyde’s apartment was also nearby. And not only that, but Ryan’s great-grandpa built the apartment and her great-grandma used to deliver milk to the residence! How cool is that?!

Bonnie Parker and Clyde Barrow are infamous criminals and murderers who went on a killing spree and crime rampage back in the early 1930s. Although the couple was widely adored by the public, the people had no idea how violent and cruel Clyde Barrow’s gang truly was. The two lovebirds, along with various members of the gang, traveled through several states over a two year period, killing more than 13 people, including peace officers.

It was in April 1933 when word got out that Bonnie and Clyde were hiding out in Joplin, MO in the aforementioned apartment. The couple, along with Clyde’s brother Buck and his wife, were raided at their temporary garage home on April 13, 1933. Two police officers were shot dead, while Bonnie and Clyde escaped. The raid on the apartment proved to be one of the most important events in the journey of the criminals, as the gang had to leave all of their personal affects behind. This is where they received all of Bonnie’s jewelry, as well as a Kodak film camera that had all of the most famous photos of the couple on it.

I briefly walked back into the museum and made my way toward the necklaces. I was absolutely in awe upon seeing them. I could not believe I was that close the infamous murderess’s jewelry. Next to the jewelry was a door – one from the nearby apartment that Ryan was telling me about. The door was riddled with bullet holes, as the residence is the historic site of one of the notorious Barrow Gang shootouts. I touched the door. It gave me chills. 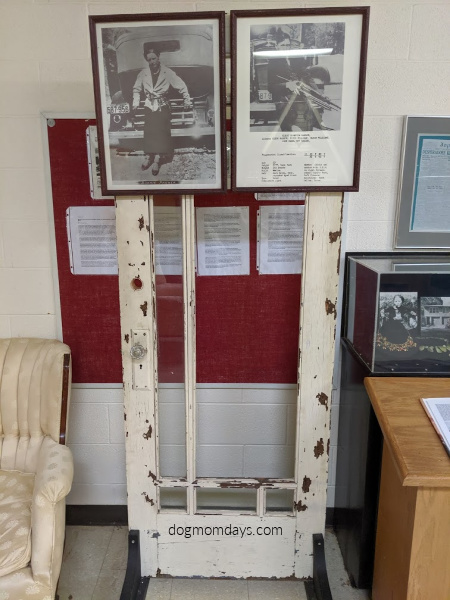 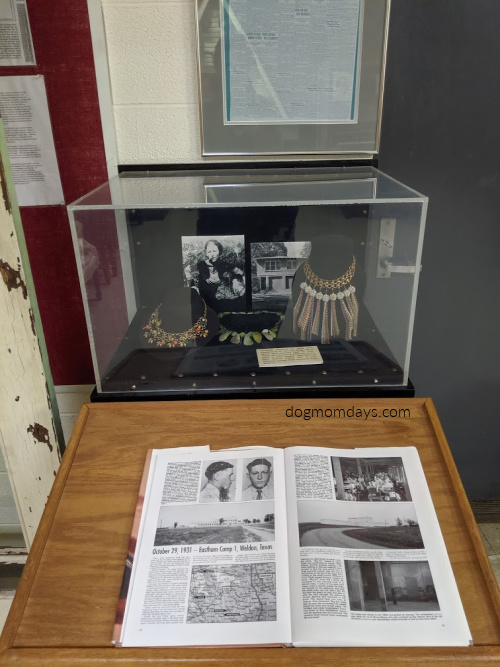 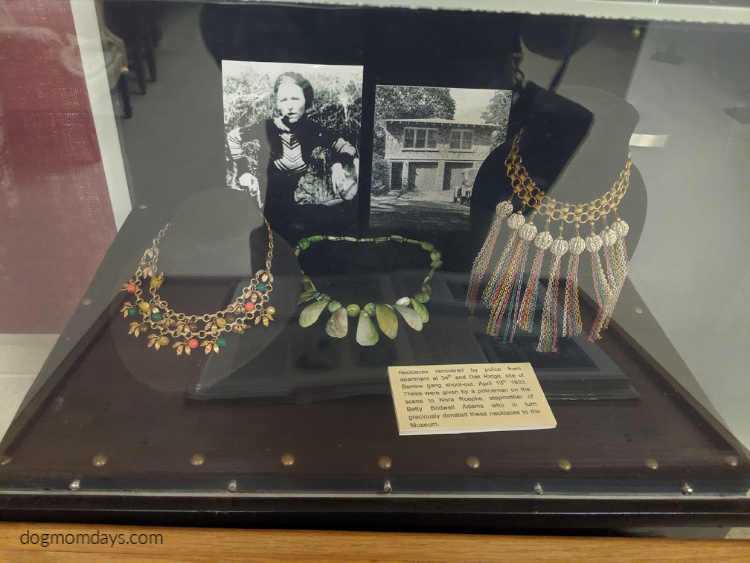 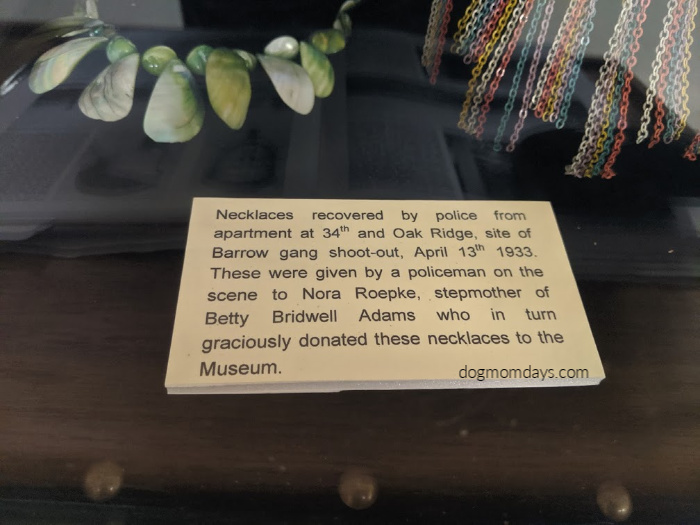 As I walked out of the museum, I thanked Ryan for her kindness and all of the helpful information. She gave me the address of Bonnie and Clyde’s apartment, so Wynston and I made our way there. It was only about 3 miles from the museum!

The weather in Joplin was perfect…at least for an Arizonan 😉 It was in the low 60s and rainy. The dreary atmosphere made visiting the Bonnie and Clyde house that much more interesting. The street was quiet, and there was a misty rain falling from the sky. As I stood in front of the house, staring at this historical place, I could imagine what happened there – the two police officers being gunned down while Bonnie and her posse escaped. The necklaces I saw at the museum were confiscated from the apartment. I felt like I was living back in time. I was so mindful at that moment, and it was one I won’t forget. 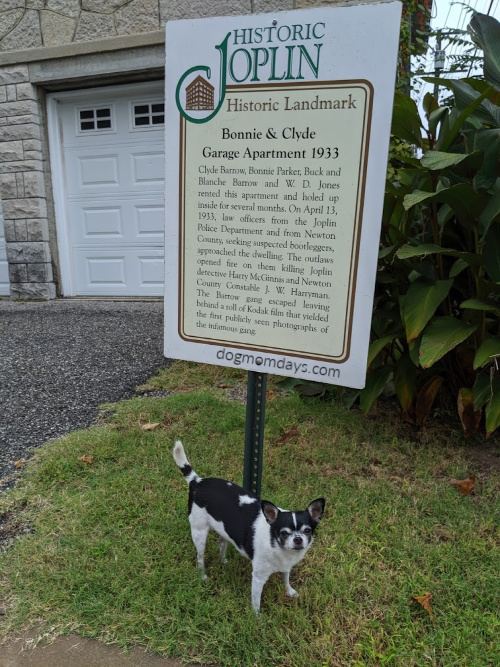 Turns out you can actually stay at Bonnie and Clyde’s apartment any time you want! It’s an Air B&B, and when I researched rates it was only $84 per night! I will absolutely be back to spend a night there – it’s decorated with 1930s decor, allowing you to enjoy the entire historical experience. 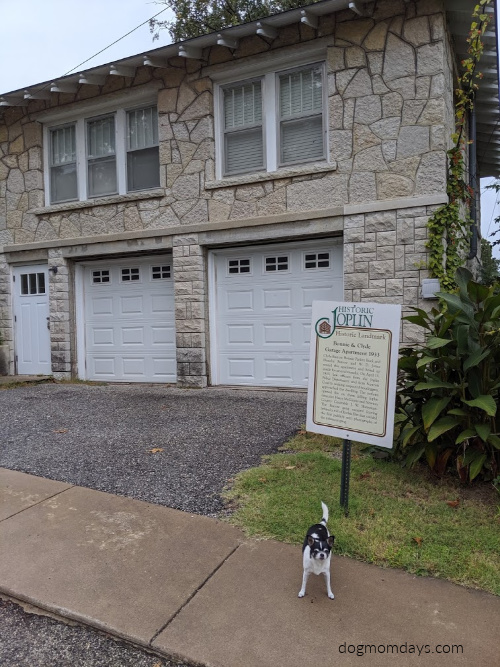 After reveling in such an incredible piece of history, I decided I wanted to enjoy the weather a little bit more. Wynston and I found a nearby campground located on Shoal Creek, and I figured it would be nice to relax by the water.

I admit the campground was a bit sketchy. There were some interesting characters around, and trashy campsites were scattered about. I was super weary of the campground in general. Although I definitely wouldn’t spend a night there by myself, it was nice to hang out midday. We set up the car along Shoal Creek so we could listen to the flow of the water, while rain lightly fell from the sky. I’m so glad we stopped there. It was a great way to end our day in Joplin, Missouri. 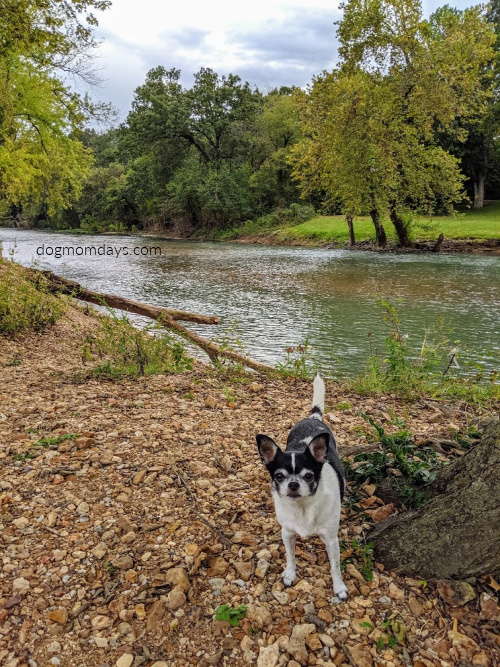 Missouri is beautiful and full of history. I’m so happy that we decided to make a side trip there during our current travels. I’d like to go back to Missouri to see more of the state and everything it has to offer. I’m finding out that I really love the central US. It never ceases to amaze me!

Have you ever been to Missouri?